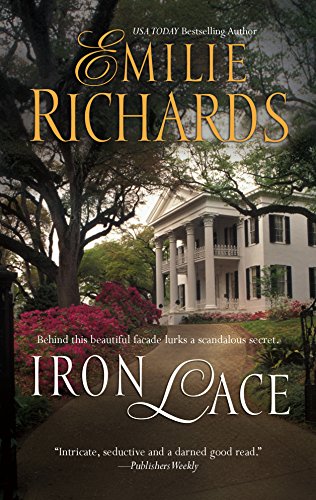 Iron Lace by Emilie Richards released on Apr 26, 2005 is available now for purchase.

Emilie Richards’s many novels feature complex characterizations and in-depth explorations of social issues. Both are a result of her training and experience as a family counselor, which contribute to her fascination with relationships of all kinds. Emilie and her husband enjoy dividing their time between the Florida Gulf Coast and Chautauqua County, New York. She is currently working on her next novel for MIRA Books.

Phillip Benedict was never easy to find. He had an efficiency apartment on New York's East Side and a room with a bed and hot plate in West Los Angeles. But when Phillip was in New Orleans, he shared quarters with Belinda Beauclaire.

Belinda had a place of her own, half of a run-down shotgun double with four rooms that lined up from front to back like the passenger cars on the City of New Orleans. She had painted those rooms the colors of jewels, amethyst and emerald, garnet and sapphire, and covered them with collages of fabric and photographs. Phillip had never been inside the shotgun when there weren't candles burning or incense from one of the botanicas on Rampart Street that sold goofer dust and John the Conqueror and whispered free advice on how to use them.

Belinda didn't believe in voodoo, but she liked it better than the Christian religions that had kept Negroes down since they stepped off the slave ships. She didn't like the term Negroes, either. Negro was all right if that other race wanted to call itself by the formal Caucasian. But if that other race was white, then by God she was black, and certainly not colored, like something a little kid did on a boring rainy day. Phillip's mother agreed with her. It was just one of the ways Belinda and Nicky were compatible.

Belinda was a stunning woman, a kindergarten teacher with a fluid, loose-limbed walk, a slow smile and her own disturbing mixture of intelligence and sensuality. Everything about Belinda suited Phillip, and these days he found his way to New Orleans more and more often.

Early on a Saturday evening in February, Phillip left Belinda's house and locked the door behind him. Belinda had been gone since early morning, and he had spent the day hunched over his portable typewriter, punching keys with the fingers of one hand and swilling dark-roast coffee and chicory with the other. He was a freelance journalist, and unless he wanted the free to mean more than it should, he had to keep work hours like anybody else.

The sun had nearly reached the horizon, but he was surprised to find that the evening air was still warm and fragrant with the promise of spring. There were rain clouds forming, and the sunset was going to be spectacular.

He was not from New Orleans, had not masked for Mardi Gras as a child or attended the city's staunchly segregated schools. He had no memories of first cigarettes or first kisses to fill him with nostalgia, but every once in a while the city could still reach out and grab him, despite his best efforts to maintain a journalist's objectivity.

Curiosity could do the same. Today, curiosity, in the form of a telephone call, had grabbed and shaken him until he suspected that his good sense had been jarred loose. But, for better or worse, he was on his way to find out.

Phillip backed his car out of Belinda's drive and turned it toward the Garden District. In her brief call, Aurore Gerrit-sen had given him careful instructions on how to reach her home. He followed them now, as his mind dwelled on the remainder of their conversation.

Aurore Le Danois Gerritsen, majority stockholder of Gulf Coast Shipping, mother of State Senator Ferris Gerritsen and daughter of a family with blood as blue as Louisiana's fleur-de-lis, wanted him to write her biography.

The horizon was a glorious sun-washed gold by the time he parked just off Prytania Street. There had been room to park in front of Aurore Gerritsen's house—more than enough room, considering that her property could easily have accommodated the greater portion of a football field. But he wanted to experience the neighborhood, to understand the milieu that had helped to make her the woman she was.

There were more than enough clues along his two-block stroll. The houses he passed were a selection of Italianate, raised cottage and Greek Revival styles that had settled comfortably into the scenery a century before. Some deserved to be called mansions, while others were only homes for the well-to-do. Moss-draped live oaks as old as the Civil War creaked in the evening breeze, and magnolias waited patiently for the days in far-off May when their blossoms would perfume the city.