Items related to Today's the Day!: Winner's Wisdom to Succeed...

Stovall, Jim Today's the Day!: Winner's Wisdom to Succeed in Every Situation

Today's the Day!: Winner's Wisdom to Succeed in Every Situation 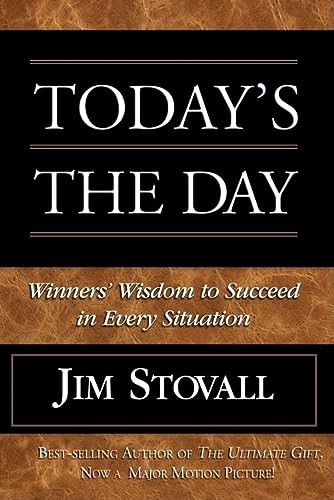 By picking up this book, you have already taken a first step toward succeeding in life. But will you take the next step. and the next? Will today be the day you finally resolve to do something positive with your life-no matter what difficulties you face?

The world is made up of all kinds of people in all sorts of circumstances. But ultimately, everyone falls into one of two categories: winners or losers those who succeed. and those who fail. Nobody sets out to lose fail. But often we don't really know what success means, or how to achieve it personally.

Now there's help. In this inspiring and uplifting book, Jim Stovall shares easy-to-read, easy-to-put-to-work nuggets of wisdom that he has learned personally by overcoming his own blindness and becoming one of America's most accomplished entrepreneurs. Each persuasive chapter gives you a practical, positive, powerful insight that can help you successfully negotiate every situation in your life.

Ready to get started learning the winner's ways of success? Today's the Day!

Jim Stovall has been a national champion Olympic weightlifter, a successful investment broker and entrepreneur. He is Co-Founder and President of the Narrative Television Network, which makes movies and television accessible for our nation's 13 million blind and visually impaired people and their families. Although originally designed for the blind and visually impaired, over 60% of NTN's nationwide audience is made up of fully-sighted people who simply enjoy the programming.

Jim Stovall hosts the Network's talk show, "NTN Showcase." His guests have included Katharine Hepburn, Jack Lemmon, Carol Channing, Steve Allen, and Eddie Albert, as well as many others. The Narrative Television Network has received an Emmy Award and an International Film and Video Award among its many industry honors.

NTN has grown to include over 1,200 cable systems and broadcast stations, reaching over 35 million homes in the United States, and NTN is shown in 11 foreign countries.

Jim Stovall joined the ranks of Walt Disney, Orson Welles, and four United States presidents when he was selected as one of the "Ten Outstanding Young Americans" by the U.S. Junior Chamber of Commerce. He has appeared on "Good Morning America" and CNN, and has been featured in Reader's Digest, TV Guide and Time magazine. He is the author of a previous book entitled You Don't Have To Be Blind To See, as well as his new book Success Secrets of Super Achievers. The President's Committee on Equal Opportunity selected Jim Stovall as the 1997 Entrepreneur of the Year.

1. Today's the Day!: Winner's Wisdom to Succeed in Every Situation

2. Today's the Day!: Winner's Wisdom to Succeed in Every Situation

7. Today's the Day!: Winner's Wisdom to Succeed in Every Situation Stovall, Jim