Items related to The Thrill of it All!

The Thrill of it All!

The Thrill of it All! 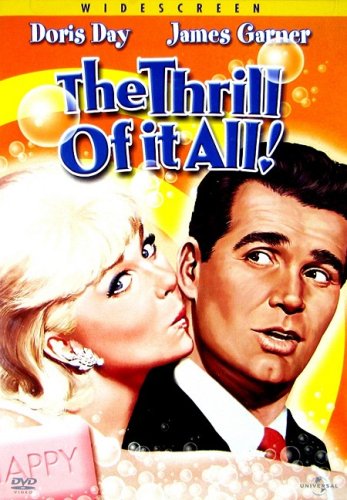 Doris Day and James Garner star in this breezy comedy about what happens when your 15 minutes of fame finally arrives – and turns your life upside down! Dr. Gerald Boyer (Garner) and his lovely wife Beverly (Day) are living the American dream. But their suburban bliss turns to media-driven frenzy when Beverly is selected as the national advertising spokeswoman for “Happy Soap.” As her career begins to skyrocket, her neglected husband is increasingly put out by the fact that when his family does get to see her, it’s on TV! Directed by Norman Jewison (Moonstruck), The Thrill of it All! is a brilliantly polished comedy jewel highlighted by a screenplay from comedy legend Carl Reiner.

James Garner substitutes for Rock Hudson in this hilarious Doris Day outing. Housewife Beverly Boyer (Day) happens by chance to give an executive of Happy Soap an honest appraisal of one of his company's products. Charmed by her forthright and honest manner, he makes Beverly the company spokesperson. When she becomes an advertising sensation, her husband (Garner) has to deal with the social ramifications of his wife making more money than he does. Day and Garner are both in good form, and Garner nicely portrays the mounting frustration of bewildered husband Gerald.

Gerald's refusal to accept that Beverly's new career infringes on her duties as housewife is, of course, outdated thinking today. Nevertheless, the film works and is sincerely funny. No wonder: comedian Carl Reiner cowrote the script. --Mark Savary