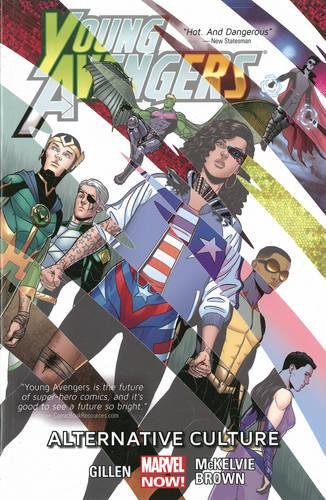 Ever wonder what the super hero equivalent of a terrible soul-sucking, talent-wasting temp job is? Wonder what Tommy (aka Speed) has been up to? Wonder why mutant David Alleyne (aka Prodigy) hasn't been even in the background in any one of the eight thousand X-books? Discover answers herein! Then: existential horror turns cosmic horror as something emerges from the shadows of the past...and it seems that the Young Avengers have one more thing to worry about. The team races desperately across the multi verse in pursuit of their missing friend, but their road trip goes crazy as it reaches its desti nati on. Because its desti nati on is mainly excitement and heartbreak. Several Young Avengers decide what to do next. The question is, whether they stay Young Avengers! Plus: Are you ready for Mother's Day?

An award-winning critic and journalist, Kieron Gillen has written for organizations such as PC Gamer, The Guardian, Rock Paper Shotgun and Wired before turning his attention to comics. His previous writing credits include the critically lauded Phonogram, Thor, S.W.O.R.D. and Generation Hope. He has relaunched two longstanding Marvel series in Uncanny X-Men and Journey into Mystery.

This team of teen and new-adult superheroes continues their galactic, dimension-spanning adventure directly from volume 1. Under the guidance of a teenage Loki, Norse god of mischief, the team is happily gallivanting through space when they are approached by Prodigy, a one-time militant mutant and current staggering genius, with warnings of a dire interdimensional threat. So begins the journey through alternate realities to confront a terrifyingly powerful tyrant called Mother. Despite the growing ensemble, Gillen makes each character distinct and likable and keeps the gay relationship between Wiccan and Hulkling at the heart of the story for some satisfying emotional stakes. As with the previous one, this slim volume is a quick read with snappy dialogue and fast, cleanly depicted action that pops with cinematic digital coloring effects. Though this is solidly a part of Marvel’s overall continuity and clearly segues into the next volume, teens will enjoy the characters’ youth-oriented plights and have their curiosities piqued as Loki’s true agenda starts becoming clearer. Grades 9-12. --Jesse Karp