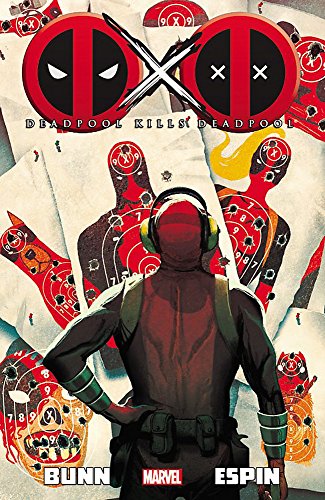 The final act of the Deadpool Killogy begins! Deadpool sets his sites on the ultimate target...himself! Contains over 700% of your daily recommended Deadpool!

Writer Cullen Bunn's first work in comics was with artist collaborator Brian Hurtt on Oni Press's noir/horror comic The Damned and the follow-up series The Damned: Prodigal Sons, and The Sixth Gun. Bunn's early Marvel work included contributions to Immortal Weapons and Deadpool Team-Up, followed by work on miniseries Fear Itself: The Deep, Fear Itself: The Fearless and Deadpool Kills the Marvel Universe. In addition to solo turns on series Wolverine and Captain America and..., Bunn has co-written Captain America with Ed Brubaker and Venom with Rick Remender, whom he later succeeded as writer.

Deadpools from multiple realities face off against each other in what might be the quippiest rumble in comic-book history. Lifelong fans of the salty mutant won’t need more persuasion than that. For the rest of us, Deadpool Kills Deadpool is the final installment in Bunn and Espin’s Deadpool Killogy (following Deadpool Kills the Marvel Universe, 2012, and Deadpool Killustrated, 2013). A malicious Deadpool from an alternate reality has decided to wipe all other incarnations from existence (even fan-favorites Kidpool, Dogpool, and the new Pandapool), and the original Deadpool is willing to recruit every other version of himself (all wearing the same outfit, no less) to stop him. Bunn has crafted a funny, edgy, and surprisingly touching saga in his Deadpool run, mastering the ability to break the fourth wall in classic snarky Deadpool style. Espin’s art may look flat on the surface, but his ability to show emotion on constantly masked characters is surprising and fresh. Hand to fans of Jason Aaron’s Wolverine and the X-Men (2012) or Gerry Duggan and Brian Posehn’s Deadpool: Dead Presidents (2013). --Ben Spanner