Items related to Soldiers Of God: White Supremacists and Their Holy...

Soldiers Of God: White Supremacists and Their Holy War for America 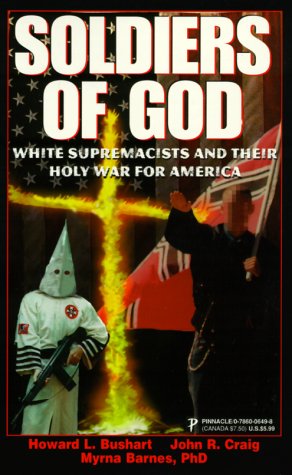 Written with the cooperation of such groups as the Aryan Brotherhood and the Ku Klux Klan, a disturbing report on the activities, organization, and beliefs of America's white supremacists exposes their threat to the nation's stability. Reprint.

Through dozens of interviews with members involved in various supremacists organizations such as the Ku Klux Klan and Aryan Nation, the authors look at the motivations that drive individuals to support these extremist associations. The men and women who are interviewed are candid in voicing their belief that the U.S. government is under the influence of the Zionist Occupational Government (ZOG), whose aim is to create a one-world government where the rights of white Americans would be severely curtailed. Although many see conspiracies behind nearly every action taken by the federal government, American readers might find themselves agreeing with some of the concerns of these groups about the growing lack of citizens' privacy as the government and private companies collect more and more data on individuals' lives. Separating this book from others on radical organizations is the authors' assertion that many members are driven by the principles of Christian Identity, a religion that believes Anglo-Saxons are the only true offsprings of Adam. Most members quoted here proclaim they are doing God's work in fighting, through violence if necessary, to create a white homeland. Bushart, Craig (both freelance journalists) and Barnes (an English teacher) are to be credited with doing firsthand research that they have melded into an involving account of what motivates fringe groups. Photos not seem by PW.
Copyright 1998 Reed Business Information, Inc.

Any book about white supremacists can easily degrade into a shouting match. Authors Bushart (Lee Coll.), John R. Craig (investigative reporter), and Barnes (English instructor) have written instead a fascinating narrative about the public and private lives of white supremacists. We see them not as single-minded, sick individuals but as complex human beings espousing extremely narrow views concerning the hierarchies of races and their places under a white God. The authors should be commended for their evenhanded reporting of this inflammatory issue. They neither blame nor excuse those they studied; they simply report on their subjects' beliefs and behavior. The most informative discussion concerns the white supremacists' theological interpretations of the Bible, which form their own racist world view and justify their actions. If racism is to be fought, one must know how the racist thinks. This book is a clear window into the mind of the white supremacist, and only through such books as this can we understand the depths of their hatred and the lengths to which they will go to rid the world of "inferior" races. Recommended for all libraries.AGlenn Masuchika, Chaminade Univ. Lib., Honolulu, HI
Copyright 1998 Reed Business Information, Inc.