Items related to Every Move You Make

Every Move You Make 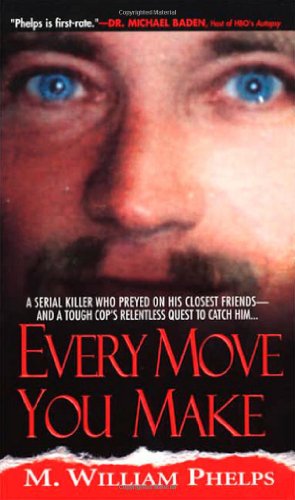 Chronicles the bizarre relationship between New York State Police Senior Investigator James Horton and Gary C. Evans, a career criminal, master of disguise, prolific thief, and serial killer who preyed upon his closest friends, over the course of more than thirteen years during which Evans maintained a nationwide investigation to uncover the truth. Original.

New York Times bestselling investigative journalist and serial killer expert M. William Phelps is the author of thirty-one nonfiction books and has appeared on over 100 television shows. He created, produced and starred in the series Dark Minds and is one of the stars of Deadly Women and Oxygen's Snapped, Killer Couples and KillerPost. Radio America calls him "the nation's leading authority on the mind of the female murderer." Touched by tragedy himself through the unsolved murder of his sister-in-law, Phelps is able to enter the hearts and minds of his subjects like no one else. He lives in a Connecticut farming community and can be reached at his website, www.mwilliamphelps.com.

"Phelps is the future of true-crime writing."

1. Every Move You Make

2. Every Move You Make

3. EVERY MOVE YOU MAKE

4. EVERY MOVE YOU MAKE