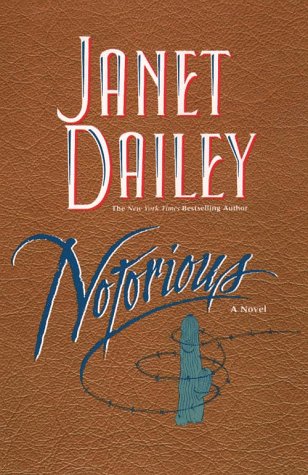 The owner of the Spur Ranch, Eden Rossiter is struggling to cope with Duke DePard, the ruthless owner of a nearby spread who is trying to squeeze her out, and her gambler brother Vince, until she joins forces with Kincade, a former Texas rodeo rider

In her latest novel, Notorious, beloved author Janet Dailey goes West, to the vast, beautiful, wild ranch country of Friendly, Nevada -- where things are anything but friendly. Trying to manage Spur Ranch, the family compound she inherited from her grandfather, tough, no-nonsense Eden Rossiter finds herself harassed mercilessly by nasty Duke DePard. DePard who owns the Diamond D Ranch, a two and a half million acre expanse that neighbors Spur Ranch and as the richest man for miles, has managed to gain almost complete authority in Friendly. Duke believes that Eden has murdered his brother, Jeff, years ago, and will do anything to see that Eden fails. If that's not enough, Eden also has to deal with her older brother Vince; although Vince is protective of Eden, and the two love each other, Vince has a big gambling problem and pressures Eden incessantly to sell the ranch, something she steadfastly refuses to do.

In the midst of Eden's problems, a stranger named Kincade pulls into town; a long-time rodeo rider whose dreams of a National Championship were shattered along with his riding arm, Kincade finds work at Spur Ranch, and finds himself irresistibly attracted to Eden. Strong, silent and indifferent to DePard's power, Kincade becomes Eden's ally in her desperate attempt to get her cattle to market -- the only thing that will save the ranch. He also realizes that Eden reciprocates his feelings of affection, but her tragic past has left her with a deep distrust of men and of love; as she grapples with her own desires, Kincade tries to break down the wall Eden has built around herself and to make her understand the depth of his feelings for her.

As expansive, majestic and compelling as the land on which it takes place, Notorious reaffirms Janet Dailey's position as the pre-eminent romance writer in America. A sweeping novel which details the difficulties and rewards of love and desire, as well as the power of the past to hurt and destroy, Notorious will undoubtedly continue Janet Dailey's stellar record of bestsellers, delighting her legions of fans and winning her countless more.

Fans of Dailey's easygoing romances (all 90 of them) can drop the reins on this one and just amble through familiar horse-opera territory with a classic cast: a Boss Lady (with a vulnerable lil' gal within) working hard to keep the family ranch out of the clutches of the local law and a neighboring heavy who owns a rich spread. Enter an ex-rodeo rider, unattached, with a score to settle, and love and plots bloom like the sage. The Stranger, Kincade (with a ``sleepy-eyed look that almost concealed the cold, hard blue of his eyes''), first spots the proud, unbendable Eden Rossiter (her hair ``the dark, rich shade of expensive Swiss chocolate'') when he wanders into the little (and misnamed) town of Friendly, Nevada. Yummy Eden is being harassed regularly by DePard, a rancher ``wide and heavy in the saddle.'' DePard not only wants Eden's Spur Ranch, but he's bent on revenge: He believes Eden murdered his brother Jeff. (Flashbacks uncover Eden's nightmare ``date'' with Jeff.) Prodding Eden to sell the ranch is her gambler brother Vince, whose only virtue seems to be his love for his sister. Kincade joins the crew at Spur and closes in on brother Vince--was he the cause of the death of Kincade's sister? Vince has been hog-tying Eden's plans to market her cattle by clueing in DePard, whose snipers warn off would-be haulers. Meanwhile, Kincade and Eden are lasso-ed in love and spend a passionate interlude in Reno while hunting down Vince, who's by now rabbitted off. It all ends with a marathon round-up and drive--and a showdown. Old stuff at an easy narrative canter by a pro, and it's all here--from the chuckwagon's lethal coffee to ``the pound of hooves, the clink of spurs, the snap of sagebrush.'' (Doubleday Book Club main selection; $250,000 ad/promo; author tour) -- Copyright ©1996, Kirkus Associates, LP. All rights reserved.

Book Description Paperback. Condition: Good. Item is in good condition. Some moderate creases and wear. This item may not come with CDs or additional parts including access codes for textbooks. Might be an ex-library copy and contain writing/highlighting. Photos are stock pictures and not of the actual item. Seller Inventory # DS-078620706X-3