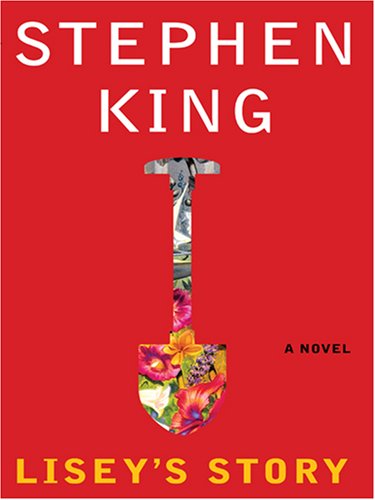 Two years after losing her husband, Lisey looks back at the intimacy that marked their marriage, her husband's success as a novelist, and his secretive nature that established Lisey's supernatural belief systems.

Since his first novel was published in 1974, Stephen King has stretched the boundaries of the written word, not only bringing horror to new heights, but trying his hand at nearly every possible genre, including children's books, graphic novels, serial novels, literary fiction, nonfiction, westerns, fantasy, and even e-books (remember The Plant?). With Lisey's Story, once again King is trying something different. Lisey's Story is as much a romance as it is a supernatural thriller--but don't let us convince you. Who better to tell readers if King has written a romantic thriller than Nora Roberts? We asked Nora to read Lisey's Story and give us her take. Check out her review below. --Daphne Durham

Nora Roberts, who also writes under the pseudonym J.D. Robb, is the author of way too many bestselling books to name here (over 150!), but some of our favorites include: Angels Fall, Born in Death, Blue Smoke, and The Reef.

Stephen King hooked me about three decades ago with that sharply faceted, blood-stained jewel, The Shining. Through the years he's bumped my gooses with kiddie vampires, tingled my spine with beloved pets gone rabid, justified my personal fear of clowns and made me think twice about my cell phone. I've always considered The Stand--a long-time favorite--a towering tour de force, and have owed its author a debt as this was the first novel I could convince my older son to read from cover to cover.

But with Lisey's Story, King has accomplished one more feat. He broke my heart.

Lisey's Story is, at its core, a love story--heart-wrenching, passionate, terrifying and tender. It is the multi-layered and expertly crafted tale of a twenty-five year marriage, and a widow's journey through grief, through discovery and--this is King, after all--through a nightmare scape of the ordinary and extraordinary. Through Lisey's mind and heart, the reader is pulled into the intimacies of her marriage to bestselling novelist Scott Landon, and through her we come to know this complicated, troubled and heroic man.

Two years after his death, Lisey sorts through her husband's papers and her own shrouded memories. Following the clues Scott left her and her own instincts, she embarks on a journey that risks both her life and her sanity. She will face Scott's demons as well as her own, traveling into the past and into Boo'ya Moon, the seductive and terrifying world he'd shown her. There lives the power to heal, and the power to destroy.

Lisey Landon is a richly wrought character of charm and complexity, of realized inner strength and redoubtable humor. As the central figure she drives the story, and the story is so vividly textured, the reader will draw in the perfumed air of Boo'ya Moon, will see the sunlight flood through the windows of the Scott's studio--or the night press against them. Her voice will be clear in your ear as you experience the fear and the wonder. If your heart doesn't hitch at the demons she faces in this world and the other, if it doesn't thrill at her courage and endurance, you're going to need to check with a cardiologist, first chance.

Lisey's Story is bright and brilliant. It's dark and desperate. While I'll always consider The Shining, my first ride on King's wild Tilt-A-Whirl, a gorgeous, bloody jewel, I found, on this latest ride, a treasure box heaped with dazzling gems.

A few of them have sharp, hungry teeth. --Nora Roberts

Stephen King is the author of more than fifty books, all of them worldwide bestsellers. His recent work includes Sleeping Beauties (co-written with his son Owen King), End of Watch, the short story collection The Bazaar of Bad Dreams, Finders Keepers, Mr. Mercedes (an Edgar Award winner for Best Novel and now an AT&T Audience Network original television series), Doctor Sleep, and Under the Dome. His novel 11/22/63—a recent Hulu original television series event—was named a top ten book of 2011 by The New York Times Book Review and won the Los Angeles Times Book Prize for Mystery/Thriller as well as the Best Hardcover Book Award from the International Thriller Writers. His epic works The Dark Tower and It are the basis for major motion pictures. He is the recipient of the 2014 National Medal of Arts and the 2003 National Book Foundation Medal for Distinguished Contribution to American Letters. He lives in Bangor, Maine, with his wife, novelist Tabitha King.

Mare Winningham has appeared in more than fifty film and television projects, garnering an Academy Award nomination for Georgia and Emmy Awards for the telefilms George Wallace and Amber Waves. She is also an accomplished singer-songwriter.