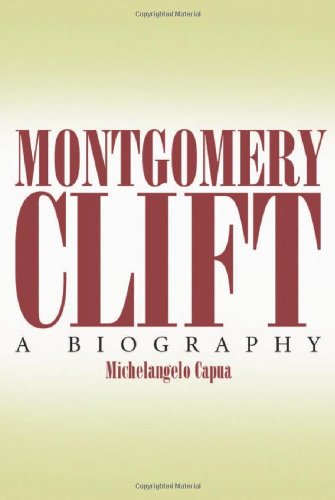 At the peak of his career in the 1950s, Montgomery Clift was the symbol of a very talented yet rebellious generation of movie stars. His acting combined the personal and the professional, and his seventeen movies show his superb craft and extraordinary sensitivity. Yet there was much more to his life than his talents as an actor--more than most people knew. This book is a biography of the extremely handsome, acutely intelligent, but tormented Montgomery Clift. His life has been described as "the longest suicide in the history of Hollywood," and this biography shows the accuracy of that description. It covers Clift's sheltered childhood, his discovery at the age of 12, the early critical acclaim that brought attention from such noted directors as Elia Kazan and Antoinette Perry, his development as a professional actor and work with many of Hollywood's greatest directors (including Kazan, Fred Zinneman, Alfred Hitchcock and John Huston), and the devastating car accident that disfigured his face and caused him to turn to drugs and alcohol. Throughout the book, attention is given to Clift's self-destructive personality--which created problems that even close friends like Elizabeth Taylor could not help him solve--and his closet homosexuality, which contributed to his intense insecurity. Richly illustrated.

Michelangelo Capua is the author of several McFarland biographies of Hollywood film stars. He lives in London.