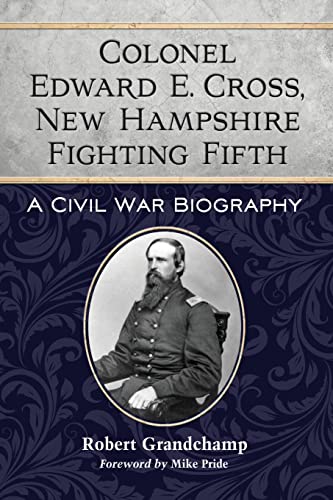 Edward Ephraim Cross (1832-1863) accomplished more in his short lifetime years than most men who live to be 100. By the eve of the Civil War, he had traveled from Cincinnati to Arizona working as a political reporter, travel writer, editor, trail hand, silver mine supervisor, and Indian fighter. In the summer of 1861, he became colonel of the Fighting Fifth New Hampshire Volunteers and gained fame as a fearless battlefield commander during action at Fair Oaks, Antietam, Fredricksburg, and Chancellorsville before being mortally wounded at Gettysburg. However, behind this great soldier lay a flawed man, an alcoholic with a short temper who fought a constant battle with words against immigrants, abolitionists, and others with whom he disagreed. This detailed biography presents a full portrait of this controversial and little-known figure, filling a critical gap in the literature of the northern Civil War experience.

The author of six books on American military history, Robert Grandchamp lives in Essex, Vermont, where he works as an analyst with the government.