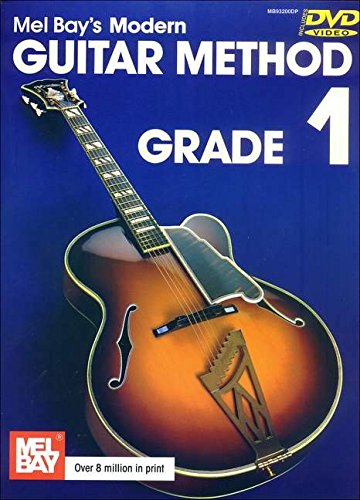 Mel Bay's Modern Guitar Method is the world's premier method for learning modern guitar. Now it is available in this package with its companion DVD video. This method, written by Mel Bay himself in 1947, is time tested and has proven to be quite successful in building the harmonic knowledge and technique needed to play any style. In book one, the guitarist will learn basic notes on the guitar, single note playing, thirds, triads, chords, and chord progressions. The student will play solos, duets, scales, and chords in the keys of C, A minor, G, and E minor while learning to read musical notation. The 105-minute DVD video follows along with the book, offering added instruction and tips along with split-screen right- and left-hand views of the exercises, solos, and duets being played. The music is also shown on screen (in notation only), so the student can either watch it on screen or follow along in the book.

William Bay is president of Mel Bay Publications, Inc. He is an accomplished guitarist and trumpet player and has performed on both instruments in a wide variety of professional settings. He is experienced as a performer and composer of music ranging from jazz and rock to the classics and sacred. He received his bachelor's degree from Washington University in St. Louis and his master's from the University of Missouri. Bill has received international acclaim for his innovative teaching methods, and he has authored over 200 books with sales in the millions.

I was 17 years old teaching at Ernie Ball's Guitar Shop in Tarzana, California. That's where I met Mel Bay through a workshop he taught. It was then that I took myself through his 7 book guitar method the first time which was very instrumental toward my professional training. Now, all these years later just I completed the updated expanded edition of the 7 book method. It is a beautiful workout and journey of graded material including: 1. Reading studies in all keys and positions. 2.Beautiful chord melodies ranging from classical to folk, blues, jazz and latin in style. 3. Theory is an integral part of this method presenting harmonized chord forms, studies in thirds and triads and quartal harmony in all keys. 4. Technical development and challenge and strong musicality frame this great work. This production is in my opinion the consumate guitar method which I recommend as a must to all serious guitarists. Congratulations to William Bay for this masterpiece. --Michael Anthony