Items related to 1920: The Year of the Six Presidents

Pietrusza, David 1920: The Year of the Six Presidents 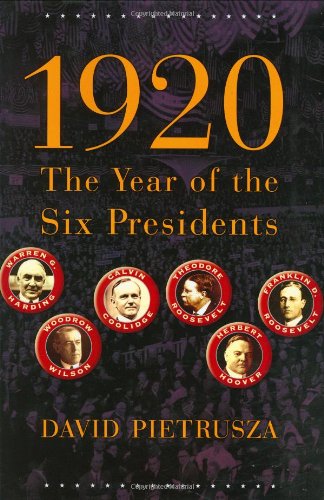 The presidential election of 1920 was one of the most dramatic ever. For the only time in the nation’s history, six once-and-future presidents hoped to end up in the White House: Woodrow Wilson, Warren G. Harding, Calvin Coolidge, Franklin Delano Roosevelt, Herbert Hoover, and Theodore Roosevelt. It was an election that saw unprecedented levels of publicity — the Republicans outspent the Democrats by 4 to 1 — and it was the first to garner extensive newspaper and newsreel coverage. It was also the first election in which women could vote. Meanwhile, the 1920 census showed that America had become an urban nation — automobiles, mass production, chain stores, and easy credit were transforming the economy and America was limbering up for the most spectacular decade of its history, the roaring ’20s. Award-winning historian David Pietrusza’s riveting new work presents a dazzling panorama of presidential personalities, ambitions, plots, and counterplots — a picture of modern America at the crossroads.

A Dazzling Panorama of Presidential Personalities, Ambitions, Plots and Counterplots: 1920: The Year of the Six Presidents --

David Pietrusza, CASEY Award winner, has authored or edited over thirty books. His Rothstein: The Life, Times, and Murder of the Criminal Genius who Fixed the 1919 World Series was nominated for the Mystery Writers of America Edgar Award in the Best Fact Crime category. He lives in upstate New York.