Items related to Jake Johnson: The Story of A Mule

Tres Seymour Jake Johnson: The Story of A Mule

Jake Johnson: The Story of A Mule 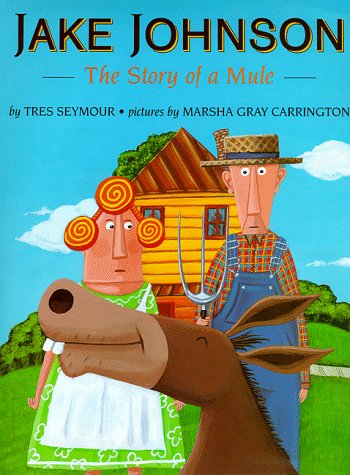 Farmer Puckett's custom of hauling a wagonload of fireworks to the fairgrounds for the Independence Day Social is endangered when his stubborn new mule Jake Johnson refuses to move. By the author of Hunting the White Cow.

Seymour (The Gulls of the Edmund Fitzgerald) has some fun with that old saw, "stubborn as a mule" in this leisurely paced picture book. Farmer Puckett plans to use the "hu-mon-gous" Jake Johnson to "haul fireworks to the fairgrounds for the Independence Day Social." Jake has other ideas. The mule plants his prodigious behind on the lawn, refuses to do a lick of work and stomps a hole in a water pipe when he gets thirsty. Jake doesn't budge until the Fourth of July, when Mrs. Puckett hitches him to the fireworks wagon and lights a blaze beneath him; subsequently, a strategic move from the mule starts the festivities ahead of schedule. Seymour's narrative adopts folksy inflections as the farmer attempts to prod Jake into a standing position ("Now you'd think a mule could only weigh so much"). Newcomer Carrington nods to Grant Wood's American Gothic with images of pitchfork-toting Farmer Puckett and his sourpuss spouse. The exaggerated acrylic paintings, which feature a blinding blue sky and summer-green grass, foreground the saucer-eyed, bucktoothed Jake and his stymied owners, and heighten the tall tale. Mrs. Puckett, who suggests that starving or beating the mule with a plank will get him to budge, proves the perfect foil for the kind farmer ("I wouldn't want to hurt the poor, sweet animal"). And Jake makes the most of the situation, eventually finding a new place to sit undisturbedACarrington's closing shot of a sedentary Jake effortlessly bring readers full circle. Ages 4-7.
Copyright 1999 Reed Business Information, Inc.

Seymour (Our Neighbor Is a Strange, Strange Man, p. 71, etc.) tells an enchanting story about a battle of wills between Farmer Puckett's wife and Jake Johnson, the new mule that Farmer Puckett bought to pull his wagon of fireworks to the town's Independence Day social. ``Trouble was, when Jake Johnson got to Farmer Puckett's yard, the mule liked the place so much he sat down. And he would not get up.'' Mrs. Puckett declares that the mule will move if he gets hungry enough, but she's wrong; a month later, as the Fourth of July approaches, Farmer Puckett is getting nervous, knowing that no one in town will ask him to hire the fireworks again if he fails this time. A fire under the mule forces Jake Johnson to move just a little, leaving the fireworks over the flame, and resulting in the best display the town has ever seen. It's a mischievous tale, if readers can get past the mistreatment of animal, humans, and property that is part of most scenes. Take it as a tall tale, and watch the fireworks fly. (Picture book. 6-9) -- Copyright ©1999, Kirkus Associates, LP. All rights reserved.

1. Jake Johnson: The Story of A Mule

2. JAKE JOHNSON: THE STORY OF A MUL

3. Jake Johnson: The Story of A Mule

5. Jake Johnson: The Story of A Mule