Items related to Skepticism, Belief, and the Modern: Maimonides to Nietzsche...

Skepticism, Belief, and the Modern: Maimonides to Nietzsche (Contestations) 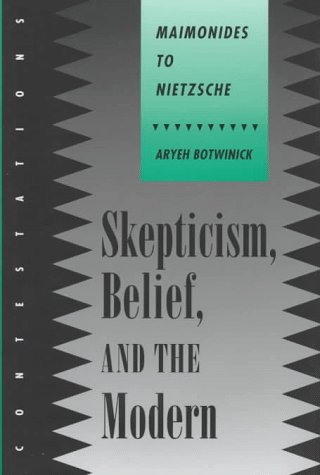 The traditional Western intellectual story posits a dramatic reversal in which secular self-understandings and modes of being in the world supplant a religious sensibility and outlook. Aryeh Botwinick proposes a radically revised understanding of the formation of the modern world view: the movement of Western thought is from inchoate and less self-conscious forms of skepticism to more fully explicit and articulated versions of skepticism. He shows that what is called modernity has been around at least from the time of Plato and is integral to the reception of Greek ideas in both the medieval and the post-medieval periods. Modernity is identified with the emergence of skepticism into full prominence, and Botwinick associates postmodernity, when the limitations of skepticism became apparent, with the development of an augmented self-consciousness. Drawing upon diverse disciplines--political theory, metaphysics, analytic philosophy, intellectual history, and Jewish studies--Botwinick calls into question some of the cherished boundaries of western thought, specifically those that isolate religion. In developing his argument, he applies deconstructionist approaches to such classic texts in the history of political thought as Plato's Republic, Maimonides' Guide of the Perplexed, and Hobbes's Leviathan.

1. Skepticism, Belief, and the Modern: Maimonides to Nietzsche (Contestations)

4. SKEPTICISM, BELIEF, AND THE MODE