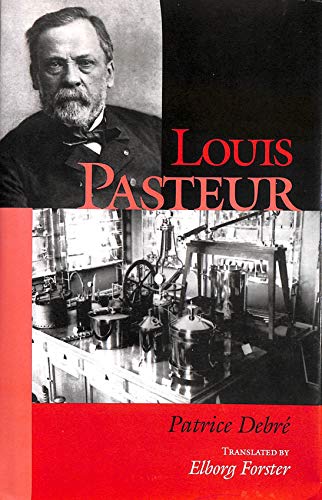 Distinguished French immunologist and physician Patrice Debré offers an extensive, balanced, and detailed account of Louis Pasteur's life, struggles, and contributions. Drawing heavily on Pasteur's own scientific notebooks and writings, Debré presents a complete critical account of his discoveries and the controversies they raised with other scientists and occasionally with his closest associates.

Louis Pasteur was more than just a man; in the words of his latest biographer he was "a living symbol, embodying both science and France." That's a pretty heavy assessment, but coming from respected French immunologist Patrice Debre, it's certainly credible. Written for the centenary of Pasteur's death, this book is a comprehensive, insightful examination of his life and work, made far more interesting and accessible by the author's natural flair for describing the details of scientific research with simple, compelling prose.

Though it is fashionable to undermine the posthumous reputations of our heroes (and many have gone to work on Pasteur), Debre finds greater value in acknowledging Pasteur's obstinacy and possible data fudging within the much-broader context of the man's incredibly successful working life. By his insistence on practically applying science to real problems, he helped further France's silk and wine industries and greatly reduced the harm of such diseases as anthrax, cholera, and rabies. With all that--and more--to his credit, it seems hardly worthwhile to complain that he may have predetermined some of his experimental results or harbored unreasonable anti-German sentiments, and Debre refuses to judge Pasteur on anything less than his entire life. On that scale, his heroism is beyond doubt. --Rob Lightner

The most extensive, balanced, and detailed account of Pasteur's life, struggles and contributions yet written