Items related to The Book of J 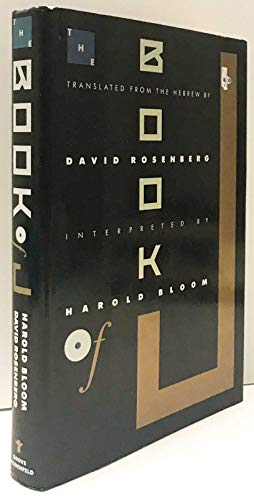 "[Rosenberg's] version is exhilarating: it evokes the power of the poetry and the force of the human predicament....Eloquent....Bloom's vision...is startling but convincing."--Grace Schulman

ee that the first strand in Genesis, Exodus, and Numbers was written by an author whom they call J, who lived in the tenth century before Christ.

In The Book of J, accompanying David Rosenberg's startling new translation, America's greatest literary critic, Harold Bloom, asserts that J was a writer of the stature of Homer, Shakespeare, and Tolstoy and puts forth the revolutionary idea that J was very likely a woman.

J was a genius with unmatched powers of irony and characterization, as shown in her unforgettable and very human portraits of Abram and Sarai, Rebecca, Jacob and Rachel, Joseph, Tamar, and Moses -- and, above all, God, or Yahweh. The Book of F reclaims the Bible's first and greatest author and presents us with the full grandeur of her creation.

Book Description Hardcover. Condition: New. Dust Jacket Condition: New. 1st Edition. NEW First Edition hardcover (Orig. 1990) Fifth Printing * ABOUT THE BOOK: * ABOUT HAROLD BLOOM: HAROLD BLOOM was until his decease a Sterling Professor of Humanities at Yale University & a former Charles Eliot Norton Professor at Harvard. His more than 40 books include "The Anxiety of Influence", "Shakespeare: The Invention of the Human", "The Western Canon", "The American Religion", and "The Daemon Knows: Literary Greatness and the American Sublime". He was a MacArthur Fellow, a member of the American Academy of Arts and Letters, & the recipient of many awards & honorary degrees, including the American Academy of Arts & Letters' Gold Medal for Belles Lettres & Criticism, the Catalonia International Prize, & Mexico's Alfonso Reyes International Prize. He lived in New Haven. * SHIPPING: MNEMOSYNE carefully wraps, labels & custom-packages this fine book for FREE domestic shipment via USPS MEDIA MAIL or USPS PRIORITY MAIL for a below-cost additional fee & via USPS FIRST CLASS INTERNATIONAL AIRMAIL to international destinations at our posted rates. Seller Inventory # 009664

THE BOOK OF J