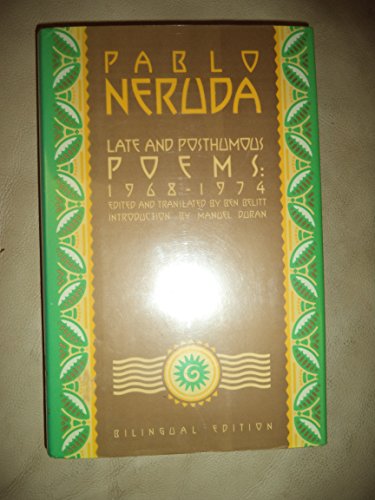 This superb bilingual anthology highlights the posthumous legacy of Pablo Neruda, the great Chilean poet and Nobel laureate, who left a vast body of unpublished work when he died in 1973. Ben Belitt, a distinguished poet in his own right, is widely regarded as the leading translator of Neruda into English. Here he has given us a Neruda as fecund and engaged as ever, ceaselessly spinning the strands of his great, seamless life's work.

"For Ben Belitt, praise, nothing but praise for his translations. He has made the poems the product of an enthralled American poet immersed in an exotic world in which he must speak in American accents out of his training and upbringing, thus creating a distinctly new contribution to the tones and rhythms of contemporary American literature. To my mind, there is no doubt that poets to come will learn and recognize what has been accomplished here: two worlds of this hemisphere as having been merged in language in which the spirit of each continent finds itself in fugue-like complement to the other, singing together."--David Ignatow

"Neruda...was a brave man who wished us well and generously left us an incomparable body of poetry, the finest in Spanish in this century."--Frank MacShane, The New York Times Book Review

"What is most moving about the later Neruda is...the enormous generosity of his vision and his unfailing sense of humor. 'You learn poetry,' he said in 1956, 'moving step by step among things and beings, never isolating, but rather containing them all within a blind expression of love."--Luis E. Yglesias, Review 76

The Chilean poet Pablo Neruda (1904-1973) was, arguably, Latin America's greatest poet and, without question, he was one of this century's most prolific. The stylistic range of his works include the intimacy and melancholy of early works such as Twenty Poems of Love and A Song of Despair, the sweeping epic ambitions of Canto General which recounts the story of Latin American history, and the respectful fascination with everyday objects expressed in Odas Elementales. Neruda was awarded the Nobel Prize in Literature in 1971.

this superb bilingual anthology highlights the posthumous legacy of Pable Neruda, the great Chilean poet and Nobel laureate, who left a vast body of unpublished work when he died in 1973.