Items related to Matterhorn: A Novel of the Vietnam War

Marlantes, Karl Matterhorn: A Novel of the Vietnam War 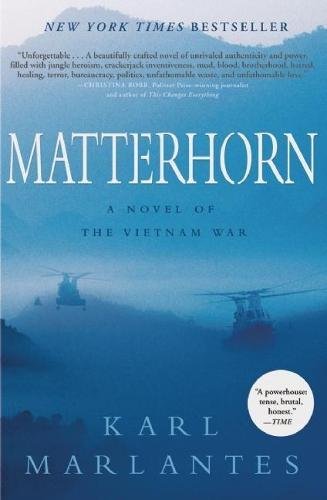 Intense, powerful, and compelling, Matterhorn is an epic war novel in the tradition of Norman Mailer’s The Naked and the Dead and James Jones’s The Thin Red Line. It is the timeless story of a young Marine lieutenant, Waino Mellas, and his comrades in Bravo Company, who are dropped into the mountain jungle of Vietnam as boys and forced to fight their way into manhood. Standing in their way are not merely the North Vietnamese but also monsoon rain and mud, leeches and tigers, disease and malnutrition. Almost as daunting, it turns out, are the obstacles they discover between each other: racial tension, competing ambitions, and duplicitous superior officers. But when the company finds itself surrounded and outnumbered by a massive enemy regiment, the Marines are thrust into the raw and all-consuming terror of combat. The experience will change them forever.

Written by a highly decorated Marine veteran over the course of thirty years, Matterhorn is a spellbinding and unforgettable novel that brings to life an entire world—both its horrors and its thrills—and seems destined to become a classic of combat literature.

Amazon Best Books of the Month, March 2010: Matterhorn is a marvel--a living, breathing book with Lieutenant Waino Mellas and the men of Bravo Company at its raw and battered heart. Karl Marlantes doesn't introduce you to Vietnam in his brilliant war epic--he unceremoniously drops you into the jungle, disoriented and dripping with leeches, with only the newbie lieutenant as your guide. Mellas is a bundle of anxiety and ambition, a college kid who never imagined being part of a "war that none of his friends thought was worth fighting," who realized too late that "because of his desire to look good coming home from a war, he might never come home at all." A highly decorated Vietnam veteran himself, Marlantes brings the horrors and heroism of war to life with the finesse of a seasoned writer, exposing not just the things they carry, but the fears they bury, the friends they lose, and the men they follow. Matterhorn is as much about the development of Mellas from boy to man, from the kind of man you fight beside to the man you fight for, as it is about the war itself. Through his untrained eyes, readers gain a new perspective on the ravages of war, the politics and bureaucracy of the military, and the peculiar beauty of brotherhood. --Daphne Durham


Mark Bowden is the bestselling author of Black Hawk Down: A Story of Modern War, as well as The Best Game Ever, Bringing the Heat, Killing Pablo, and Guests of the Ayatollah. He reported at The Philadelphia Inquirer for twenty years and now writes for Vanity Fair, The Atlantic, and other magazines. He lives in Oxford, Pennsylvania.

Matterhorn is a great novel. There have been some very good novels about the Vietnam War, but this is the first great one, and I doubt it will ever be surpassed. Karl Marlantes overlooks no part of the experience, large or small, from a terrified soldier pondering the nature of good and evil, to the feel and smell of wet earth against scorched skin as a man tries to press himself into the ground to escape withering fire. Here is story-telling so authentic, so moving and so intense, so relentlessly dramatic, that there were times I wasn’t sure I could stand to turn the page. As with the best fiction, I was sad to reach the end.

The wrenching combat in Matterhorn is ultimately pointless; the marines know they are fighting a losing battle in the long run. Bravo Company carves out a fortress on the top of the hill so named, one of countless low, jungle-coated mountains near the border of Laos, only to be ordered to abandon it when they are done. After the enemy claims the hill’s deep bunkers and carefully constructed fields of fire, the company is ordered to take it back, to assault their own fortifications. They do so with devastating consequences, only to be ordered in the end to abandon Matterhorn once again.

Against this backdrop of murderous futility, Marlantes’ memorable collection of marines is pushed to its limits and beyond. As the deaths and casualties mount, the men display bravery and cowardice, ferocity and timidity, conviction and doubt, hatred and love, intelligence and stupidity. Often these opposites are contained in the same person, especially in the book’s compelling main character, Second Lt. Waino Mellas. As Mellas and his men struggle to overcome impossible barriers of landscape, they struggle to overcome similarly impossible barriers between each other, barriers of race and class and rank. Survival forces them to cling to each other and trust each other and ultimately love each other. There has never been a more realistic portrait or eloquent tribute to the nobility of men under fire, and never a more damning portrait of a war that ground them cruelly underfoot for no good reason.

Marlantes brilliantly captures the way combat morphs into clean abstraction as fateful decisions move up the chain of command, further and further away from the actual killing and dying. But he is too good a novelist to paint easy villains. His commanders make brave decisions and stupid ones. High and low there is the same mix of cowardice and bravery, ambition and selflessness, ineptitude and competence.

There are passages in this book that are as good as anything I have ever read. This one comes late in the story, when the main character, Mellas, has endured much, has killed and also confronted the immediate likelihood of his own death, and has digested the absurdity of his mission: "He asked for nothing now, nor did he wonder if he had been good or bad. Such concepts were all part of the joke he’d just discovered. He cursed God directly for the savage joke that had been played on him. And in that cursing Mellas for the first time really talked with his God. Then he cried, tears and snot mixing together as they streamed down his face, but his cries were the rage and hurt of a newborn child, at last, however roughly, being taken from the womb."

Vladimir Nabokov once said that the greatest books are those you read not just with your heart or your mind, but with your spine. This is one for the spine. --Mark Bowden

A graduate of Yale University and Rhodes Scholar at Oxford University, Karl Marlantes served as a Marine in Vietnam, where he was awarded the Navy Cross, the Bronze Star, two Navy Commendation Medals for valor, two Purple Hearts, and ten air medals. This is his first novel.

Book Description Hardcover. Condition: New. Hardcover. New, unused. Free of any markings and no writings inside. For any additional information or pictures, please inquire. Seller Inventory # 200612032

Matterhorn: A Novel of the Vietnam War Marlantes, Karl