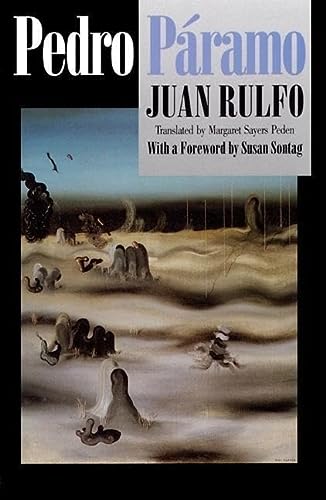 A classic Mexican literary novel. Since its publication in 1955, Juan Rulfo's first effort has been translated into many languages and has gone through many editions. This one is the only one revised and edited by the Juan Rulfo Foundation and should be considered the definitive edition.

A masterpiece of the surreal, this stunning novel from Mexico depicts a man's strange quest for his heritage. Beseeched by his dying mother to locate his father, Pedro Paramo, whom they fled from years ago, Juan Preciado sets out for Comala. Comala is a town alive with whispers and shadows--a place seemingly populated only by memory and hallucinations. Built on the tyranny of the Paramo family, its barren and broken-down streets echo the voices of tormented spirits sharing the secrets of the past.

"Among contemporary writers in Mexico today Juan Rulfo is expected to rank among the immortals."--Selden Rodman, The New York Times Book Review

"A powerful fascination...vivid and haunting; the style is a triumph."--New York Herald Tribune

Juan Rulfo (1918-1986) was born in Sayula, in the state of Jalisco, Mexico. Although he was not a prolific writer and completed only one collection of short stories, The Burning Plain (1953), one novel, Pedro Paramo, and several screenplays, these works established him as a major literary figure in Latin America. He influenced both a number of later Latin American writers as well as being a source of inspiration, in his criticism of Mexico's semi-feudal structures, to the student revolutionaries of the late 1960s. These contributions to literature were recognized in 1970 when he was awarded Mexico's National Prize for Literature. As well, in 1980 he was elected to the Mexican Academy of Language and in 1985 he was awarded the Premio Cervantes by Spain. Rulfo died in 1986 of a heart attack.

Margaret Sayers Peden is Professor Emerita of Spanish at the University of Missouri. She has translated numerous works from the Spanish to great acclaim, including The Old Gringo by Carlos Fuentes, The Stories of Eva Luna by Isabel Allende, and Elemental Odes by Pablo Neruda.