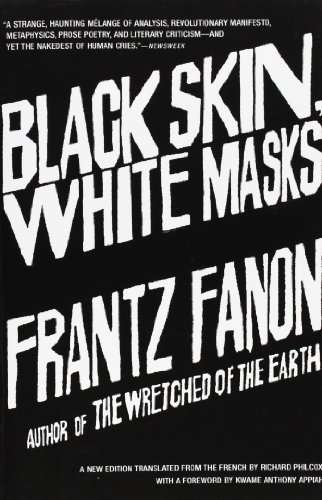 Few modern voices have had as profound an impact on the black identity and critical race theory as Frantz Fanon, and Black Skin, White Masks  represents some of his most important work. Fanon’s masterwork is now available in a new translation that updates its language for a new generation of readers.

A major influence on civil rights, anti-colonial, and black consciousness movements around the world, Black Skin, White Masks is the unsurpassed study of the black psyche in a white world. Hailed for its scientific analysis and poetic grace when it was first published in 1952, the book remains a vital force today from one of the most important theorists of revolutionary struggle, colonialism, and racial difference in history.

Frantz Fanon (1925-1961) was born in Martinique and studied medicine in France, specializing in psychiatry. Sent to a hospital in Algeria, he found his sympathies turning toward the Algerian Nationalist Movement, which he later joined. He is considered one of the most important theorists of the African struggle for independence and of the psychology of race.

Richard Philcox is the distinguished translator of many works by Caribbean writer Maryse Condé.

A strange, haunting mélange of analysis, revolutionary manifesto, metaphysics, prose poetry and literary criticism and yet the nakedest of human cries.” Newsweek

A brilliant, vivid and hurt mind, walking the thin line that separates effective outrage from despair... As a writer he demonstrates how insidiously the problem of race, of color, connects with a whole range of words and images. . . . Yet it is Fanon the man, rather than the medical specialist or intellectual, who makes the book so hard to put down.” Robert Coles, The New York Times Book Review

A reasoned, explosive, and important book centered on the identity problem of the black man, by the author of a classic study of racism and colonialism, Wretched of the Earth.” Publishers Weekly

This book should be read by every black man with a desire to understand himself and the forces that conspire against him.” Floyd McKissick, former national director, CORE