Items related to The Bonus Army: An American Epic

The Bonus Army: An American Epic 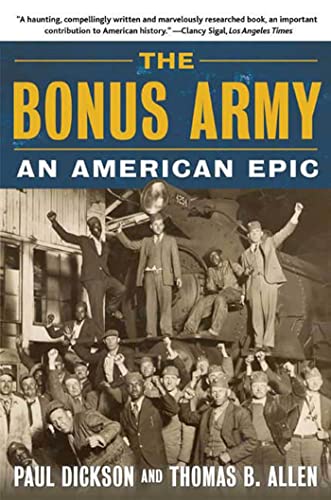 In the summer of 1932, at the height of the Depression, some forty-five thousand World War I veterans-whites and blacks together-descended on Washington D.C., from all over the country to demand the bonus promised them eight years earlier for their wartime service. Fearing violence after the Senate defeated the "bonus bill," Herbert Hoover's Army Chief of Staff, Douglas MacArthur, led tanks through the streets on July 28 to evict the bonus marchers.

Through seminal research, including interviews with the last surviving witnesses, Paul Dickson and Thomas B. Allen tell the full story of the Bonus Army, recovering the voices of ordinary men who dared tilt at powerful injustice. The march ultimately transformed the nation, inspiring Congress to pass the GI Bill of Rights in 1944, one of the most important pieces of social legislation in our history, which in large part created America's middle class.

Paul Dickson, author of Sputnik: The Shock of the Century, and numerous books about history, lives in Garrett Park, Maryland.

Thomas B. Allen, author of George Washington, Spymaster and many books about military and intelligence history, lives in Bethesda, Maryland.

“The account by Dickson and Allen recalls the subliminal force of Let Us Now Praise Famous Men with gaunt stories of character at the limits of dignity.” ―Taylor Branch, New York Review of Books

“A revealing and fascinating account . . . The book's most haunting aspect is its verbal and pictorial record of the marcher's individual experiences . . . For all the defeats that the Bonus Army endured, its struggle paved the way for the G.I. Bill of Rights. And it underscored the power that could be unleashed by the marcher who made himself 'a petition in boots.' Its legacy was of great importance to the World War II veterans whose homecomings were a far cry from the hardships and indignities of the 1930's. That legacy is all the more meaningful today.” ―Janet Maslin, The New York Times

“The Bonus Army is one of those half-forgotten chapters in American history that not only richly deserves retelling, but allows you to tell plenty of other good stories along the way. And what a great pleasure it is to have it retold by two old pros like Paul Dickson and Thomas B. Allen . . . Exactly the kind of book publishers should be giving us more of--responsible popular history, researched to the footnoted standards of the academy but written for the pleasure of general readers who are looking for a good story . . . A rewarding book.” ―Kevin Coyne, Newsday

“The Bonus Army is a feat of research and analysis--a thoughtful, strong argument that these marches were among the most important demonstrations of the 20th century. Dickson and Allen speculate about why the episode is not more widely known. They cite as possible reasons the encampment's integration in segregated Washington, the ease with which the marchers could be dismissed as Communists, and the fact that no political party stood to gain from the movement's success or failure. Some critics suggest that the authors failed to prove any of these theories or provide any convincing reasons for the Bonus Army's eventual failure. But, Dickson and Allen do paint moving, harrowing portraits of individuals' plights and make clear how the corps' ordeal laid the groundwork for the legislation that became the G.I. Bill of Rights.” ―Bookmarks Magazine

“Here a demonstrator is clubbed and tear-gassed, but there real reforms are won: thus unfolds this memorable story of a now-forgotten episode in 20th-century history. The idea that WWI veterans should receive a bonus for their service took years to build and years more to fulfill. As popular historians Dickson and Allen write, part of the delay was a matter of political clout; whereas Civil War vets formed a powerful and populous voting bloc and agitated for pensions, by the time Woodrow Wilson sent troops off to war in Europe, his notion was that soldiers would pay for their own life insurance and 'there would be no demand for postwar compensation to those who were not injured during their service.' Veterans in Oregon thought otherwise, and soon African-American vets from Virginia and hill-country farmers from Tennessee would join in their call for what was now being called a 'bonus' for service. When neither Congress nor presidents would cough up, the vets began to organize nationally, and in 1932 thousands arrived in Washington to protest the Senate's defeat of a bill that would have funds for them. Sure that the leaders were Communists, Army Chief of Staff Douglas MacArthur sent in troops, routing the ethnically mixed protestors and killing some. On hearing the news, Franklin Roosevelt reportedly said to an aide, 'This will elect me,' and indeed it seemed one of the last straws for the Hoover administration. Ironically, the Bonus Army's leadership was far more inclined to the right than the left, so that even as MacArthur was blustering about the Reds, a group of financiers approached a retired Marine Corps general to lead an army of veterans to stage a coup. The general replied, 'If you get these 500,000 soldiers advocating anything smelling of fascism, I am going to get 500,000 more and lick the hell out of you, and we will have real war right at home." The lesson the New Deal government took home: avoid ticking off discontented veterans, whence the GI Bill. A lively, engaging work of history.” ―Kirkus Reviews

“As Dickson and Allen show throughout this empathetic and well-researched volume, the [Bonus Expeditionary Force] meant different things to a number of groups vying for power in the tumultuous political climate of the early '30s. Communist organizers saw the veterans as the shock troops of the emerging 'American Soviet Government'; the Hoover administration viewed them as mostly 'ex-convicts, persons with criminal records, radicals, and non-servicemen' trying to strong-arm the government; and corporate America saw them as competition for dwindling government aid money. To most Americans, however, they were underdogs fighting the government and the corporate corruption that, in their minds, was responsible for the Depression. The book moves beyond these broad generalizations to find the personal stories of the march, fleshing out both minor and major players surrounding the BEF. And in describing the use of tanks, bayonets and tear gas to expel the unarmed vets and their families from Washington--as well as the deadly mistreatment of BEF members in government work camps after the march--Dickson and Allen highlight the sacrifices these women and men made on our own soil to win fair treatment for veterans of future wars. Their important and moving work will appeal to both professional historians and casual readers interested in the history of America's changing attitudes towards its soldiers.” ―Publishers Weekly

1. The Bonus Army: An American Epic

2. The Bonus Army: An American Epic

3. The Bonus Army: An American Epic

4. The Bonus Army: An American Epic

5. The Bonus Army: An American Epic

6. The Bonus Army: An American Epic Dickson, Paul and Allen, Thomas B.