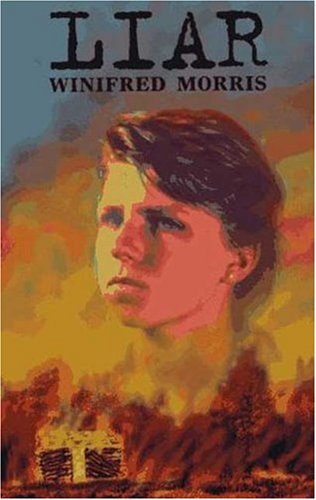 Fourteen-year-old Alex leaves his self-destructive, emotionally abusive mother to live with his grandparents in Rimrock, Oregon, and as he begins a new life in a small rural community, he battles his impulses to fight, steal, and lie for survival.

Trapped by the lies his mother tells him, Alex acts out violently, angrily. It doesn't take long before his life disintegrates from the weight of this endless cycle of lies and rebellion. Now, at 15, Alex has the chance--perhaps his last chance--to make a fresh start at his grandparents' farm. Can he contain the rage that boils beneath the surface of his skin? Winifred Morris has written an astounding story about how hard it is to heal the damaged parts of ourselves. Robert Cormier says, "... you'll find yourself cheering him on as the author captures all the desperations and desires of being young and hurting."

Grade 6-9. One step away from a juvenile correction center, Alex, a rough L.A. teen, is placed with little-known grandparents in a small, rural Oregon community. His long hair and earring set him apart from his short-haired flannel-shirted schoolmates. Only Barry, resident misfit, and Mickey, an artistic girl, befriend him. His troubled past and bad luck soon trip him up. His dysfunctional mother's surprise visit triggers an emotional, unpleasant scene; he runs away and seeks shelter in an abandoned homestead, accidentally setting it on fire. Tensions escalate at school, where he is accused of stealing a walkman. Angry and paranoid, he flees again, hoping to elude his probation officer. Trapped by an early blizzard, he is rescued by a father whom he's never met. Alex is placed in a juvenile-correction facility after all, but his grandparents and Mickey help him to clear his name. Flat, stereotyped characters and predictable situations limit readers' sympathy for the protagonist and his plight. Though his grandparents and Mickey are fleshed out, the mother, probation officer, school personnel, and students are "types." Alden Carter's Up Country (Putnam, 1989) and S. E. Hinton's Taming the Star Runner (Dell, 1989) cover the same territory with more substantive plotting, multidimensional characters, and crisp narrative styles. Gary Paulsen's Harris and Me (Dell, 1995) uses humor to offset a thoughtful, powerful, bittersweet story of a boy from a thoroughly dysfunctional family who, like Alex, is sent to the country to live with relatives.?Alice Casey Smith, Sayreville War Memorial High School, NJ
Copyright 1997 Reed Business Information, Inc.

Book Description Condition: New. Fourteen-year-old Alex struggles to rise above the life events which seem to conspire against him, from a mother who lies, to a probation officer who won't give him a break, to bullies at his new school. Seller Inventory # 9780802784612