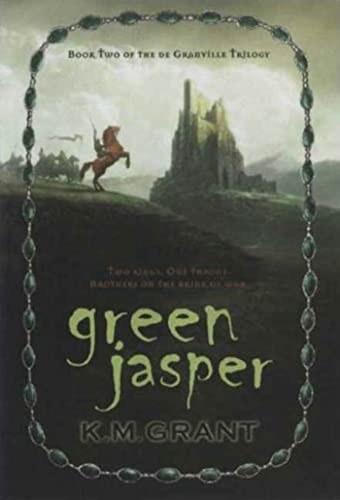 Is it foolish to think that one boy and a blood red horse can save a fair maiden and the throne of England?

Will and Gavin de Granville have come back from the crusade older, braver, and definitely wiser.

Ellie has been longing for their return. But they've changed. And home is almost as dangerous as the war they've just left.

The king is missing. The country is in turmoil. And some men would do anything for power. What will two brothers risk for the woman they both love and the king they have both sworn to protect and serve? In the second book of the de Granville trilogy, Will and Gavin find their family – and all of England – in serious peril.

K. M. Grant was the third of seven children, and she grew up in the wild countryside of Scotland. When she was younger, she learned that her ancestor, Frances Townley, was executed in 1746 for his faith and his severed head was shipped around the country as an example to others. Her family kept a lock of his hair framed in the sitting room to remember him by. That family lore fueled Grant's imagination, and later, a wild red horse named Muffet inspired her to write about Hosanna. She lives in Glascow, Scotland, with her husband and children where she works as a journalist and a broadcaster.

Blood Red Horse was K. M. Grant's first novel. The thrilling conclusion to the de Granville trilogy, Blaze of Silver, will be published next spring.

Grade 5-9–Green Jasper begins where Blood Red Horse (Walker, 2005) ended. With King Richard imprisoned and supposed dead, there is turmoil in England in the 12th century. Will and Gavin de Granville have returned from the crusade older, wiser, and scarred from battle, Gavin having lost an arm. His betrothed, Ellie, has waited patiently for their return and now is preparing for her marriage. The ceremony is disrupted by Constable de Scabious and his men, who have spread rumors that King Richard is dead and that his brother John has taken the throne. When Ellie is kidnapped and taken to de Scabious's castle, Will feels that his duty is to rescue her while Gavin, who has been injured again, believes that they must be more cautious. Ellie, while waiting and hoping for rescue, holds on to her green jasper necklace, a wedding gift from Gavin that represents faith. Throughout this second adventure of the de Granvilles, loyalties are divided, conflicts arise, and villagers are unsure whom they can trust. Hosanna, the blood red horse, plays an important role in tying the characters together and aiding the knights in their quest to protect the king and rescue the woman they love. Although this action-packed novel can be read alone, it is much more enjoyable if read in sequence.–Denise Moore, O'Gorman Junior High School, Sioux Falls, SD
Copyright © Reed Business Information, a division of Reed Elsevier Inc. All rights reserved.