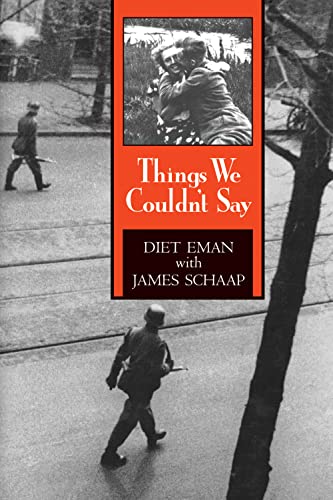 Things We Couldn't Say is the true story of Diet Eman, a young Dutch woman, who, with her fiance, Hein Sietsma, risked everything to rescue imperiled Jews in Nazi-occupied Holland during World War II. Throughout the years that Diet and Hein aided the Resistance--work that would cost Diet her freedom and Hein his life--their courageous effort ultimately saved hundreds of Dutch Jews.

Included among the "Righteous Gentiles" at Yad Vashem,Israel's Holocaust memorial in Jerusalem. She studiednursing after World War II and worked as a head nurse inVenezuela and as a foreign correspondent and export managerin Grand Rapids, Michigan, where she still resides.

Professor of English at Dordt College in Sioux Center, Iowa.