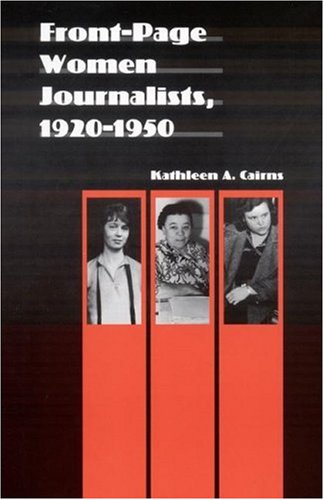 During a time when female reporters were almost always relegated to the society and women’s pages of the newspapers, a few hundred notable women broke barriers and wrote their way onto the front pages of metropolitan newspapers. Front-Page Women Journalists, 1920–1950 takes a look at the lives and careers of women who worked successfully in this male-dominated profession. Kathleen A. Cairns examines the roles women played in early-twentieth-century newspaper journalism and the influence they had on future generations of newspaperwomen through the examples of Agness Underwood, Charlotta Bass, and Ruth Finney. Each of these front-page women faced her own challenges, whether in regard to class, race, or gender. To get to the newsroom, and to stay there, they had to craft subtle, clever, and exhausting strategies. They had to be tough but compassionate, deferential yet independent, tenacious but also gracious. Most important, they could never openly challenge larger cultural assumptions about gender or suggest that they sought to advance the status of all women as well as themselves. In spite of these challenges, front-page women played a significant role in reshaping public perceptions about women’s roles. The public nature of journalism gave these women a large audience and a prominent stage on which to act out new professional identities. Their audience witnessed them traipsing through war zones, debating politics, and gaining scoops on high-profile criminal cases. The women viewed themselves as path-breakers, although they rarely openly acknowledged it. Between the lines, however, they suggested that they understood how important their success was to future generations of women. They quietly mentored other young female reporters, paved the way for the eventual admission of women into the all-male press clubs, and opened up more career opportunities for women.

Kathleen A. Cairns is a journalist and also teaches history and humanities at California State University, Sacramento.

“[Cairns] focuses on three women who began their careers in California and went on to achieve considerable success and even fame. . . . The three different personalities and different career trajectories bear witness to the very real possibilities—and difficulties—of challenging journalists’ long-standing assumption that only white men were important as actors and audiences, so only white men could write for and about white men. As such, their stories will enliven undergraduate journalism history courses.”—Linda Steiner, American Journalism (Linda Steiner American Journalism)