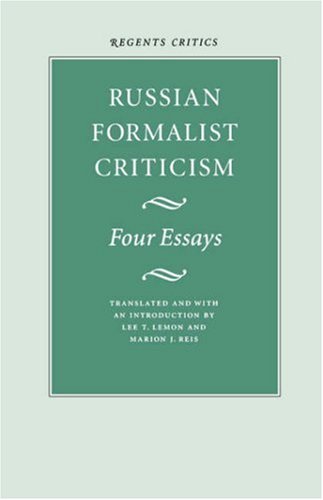 Russian formalists emerged from the Russian Revolution with ideas about the independence of literature. They enjoyed that independence until Stalin shut them down. By then they had produced essays that remain among the best defenses ever written for both literature and its theory. Included here are four essays representing key points in the formalists' short history. Victor Scklovsky's pathbreaking "Art as Technique" (1917) vindicates disorder in literary style. His 1921 essay on Tristram Shandy makes that eccentric novel the centerpiece for a theory of narrative. A section from Tomashevsky's "Thematics" (1925) inventories the elements of stories. In "The Theory of the 'Formal Method'" (1927) Boris Eichenbaum defends Russian formalism from many attacks. An able champion, he describes formalism's evolution, notes its major workers and works, clears away decayed axioms, and rescues literature from "primitive historicism" and other dangers. These essays set a course for literary studies that led to Prague structuralism, French semiotics, and postmodern poetics. Russian Formalist Criticism has been honored as a Choice Outstanding Academic Book of the Year by the American Library Association.