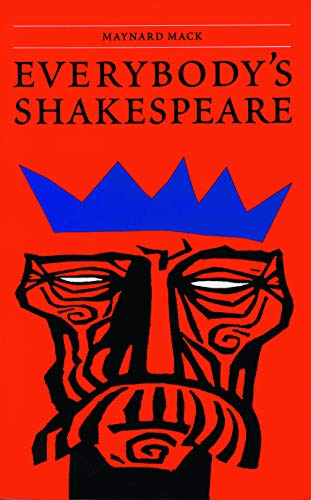 Everybody’s Shakespeare brings the insights and wisdom of one of the finest Shakespearean scholars of our century to the task of surveying why the Bard continues to flourish in modern times. Mack treats individually seven plays—Hamlet, King Lear, Macbeth, Othello, Romeo and Juliet, Julius Cesar, and Antony and Cleopatra—and demonstrates in each case how the play has retained its vitality, complexity, and appeal.

Maynard Mack is Sterling Professor of English at Yale University. Among his publications are King Lear in Our Time, Rescuing Shakespeare, and Alexander Pope: A Life.

"These are compelling, thoughtful essays that will encourage any attentive reader to think afresh about familiar plays."-Library Journal Library Journal "Beautifully written, deeply meditated essays... The book is a pleasure-jargon-free and clearly organized. It is also wise. Like Coleridge, sometimes Mack opens up sudden illuminations we wonder we never saw before."-Choice Choice "This is a sane, hugely compassionate book that captures much of what is great about Shakespeare's dramatic vision of human vicissitude. What Mr. Mack thinks about the current state of criticism is ultimately less important than what he thinks about Shakespeare's largeness of heart. These essays make up a whole book and richly deserve to be rescued from the oblivion that threatens any writer of occasional essays. By speaking of the comforts of art, they teach us, in Antony's phrase, to contend even with the 'pestilent scythe' of Death itself."-Washington Times Washington Times