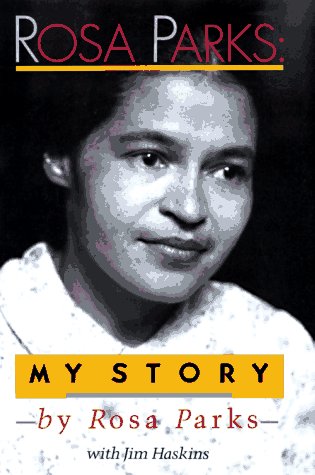 "Even those familiar with her name will realize on reading this engrossing account how little they really know of Parks's life and the events that surrounded the dawning Civil Rights movement. Setting her historic refusal to give up her seat on a bus in the context of a life that began in 1913 in rural Alabama dramatizes the fact that her action came at a time and place that gave it the force to challenge the rigors of a lopsided system of justice. Few will be unmoved by the tactics employed by whites to disrupt the subsequent boycott; at the center, always, is Parks's dignified, calm recounting of outrages against her and other women and men, giving her words weight and impact as no raw fury could. Like sitting at the knee of an elder with much to tell, reading her story leads to ever more questions ('What was it really like then?') and shock that such injustices not only existed in the recent past but still linger." - Kirkus Reviews

Rosa Parks also worked with Jim Haskins to write Rosa Parks: My Story (Dial and Puffin), an award-winning book for older readers. Mrs. Parks was awarded the Congressional Medal of Honor in June 1999. She lives in Detroit, Michigan.

Many readers of this absorbing autobiography will be familiar with the incident for which Rosa Parks is best known: on December 1, 1955, she refused to surrender her seat to a white person on a Montgomery, Ala.,stet comma/rl city bus. What this book provides is a framework that will enable its audience to put this historic moment into a broader context, and to appreciate the monumental effect on one woman and on an entire nation. Long before Parks's stand against racial segregation, her "very strong sense of what was fair" had provoked her to launch her own personal campaign against injustice. In lively anecdotal style, she describes her early family life and schooling, her run-ins with disdainful white children, her courtship and marriage to Raymond Parks and her active role in the Montgomery NAACP and in the civil rights movement. The simplicity and candor of this courageous woman's voice make these compelling events even more moving and dramatic. Some readers will be stunned by Parks's firsthand accounts of violence against blacks; all will be deeply impressed by her boundless energy and courage. All ages.
Copyright 1991 Reed Business Information, Inc.