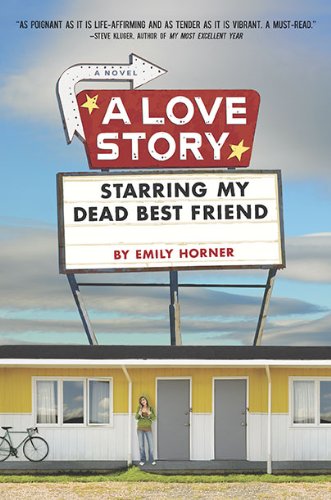 For months, Cass has heard her best friend, Julia, whisper about a secret project. When Julia dies in a car accident, her drama friends decide to bring the project?a musical called Totally Sweet Ninja Death Squad?to fruition. But Cass isn't a drama person. She can?t take a summer of painting sets, and she won?t spend long hours with Heather, the girl who made her miserable all through middle school and has somehow landed the leading role. So Cass takes off. In alternating chapters, she spends the first part of summer on a cross-country bike trip and the rest swallowing her pride, making props, and?of all things?falling for Heather.

This is a story of the breadth of love. Of the depth of friendship. And of the most hilarious musical one quiet suburb has ever seen.

About the Author:
Emily Horner is originally from Montreal, Quebec. A fan of Japanese pop culture—including ninjas, of course—she is currently a librarian in Brooklyn, New York.
From School Library Journal:
Starred Review. Grade 8 Up After the death of her best friend, Cass finds herself questioning her own identity, sexuality, and place in the high school hierarchy. Before she died, Julia had been working on a top-secret project: a musical called Totally Sweet Ninja Death Squad. Now that she is gone, her boyfriend, Oliver, and her other theater friends are determined to stage the show as a tribute. Cass is committed to helping backstage, building spectacular traps and weapons until Heather, Cass's middle school nemesis, is cast as the female lead. Heather was the first person to tease Cass about her close friendship with Julia and suggest that Cass wanted it to be something more, and since Julia's death, Oliver has been making barbed remarks, as well. In the face of these complications, Cass sets off on a quest of her own: biking cross-country to take Julia's ashes to California. She tells herself that she is not running away from Oliver's hostility, Julia's friends' cold shoulders, or Heather's disconcerting new niceness. The journey helps her discover things she never knew about herself, and when she finds herself at rock bottom, she learns that Julia's friends are her friends, too. This funny, touching, and sweet coming-of-age story explores serious themes in a fresh way. Cass's tentative questioning of her own sexuality and her hesitant approach toward her first serious romantic relationship will delight readers who struggle with similar issues, as well as those who simply enjoy a well-crafted story. Misti Tidman, Boyd County Public Library, Ashland, KY
Copyright © Reed Business Information, a division of Reed Elsevier Inc. All rights reserved.