Bellairs, John The House with a Clock in its Walls (Lewis Barnavelt)

The House with a Clock in its Walls (Lewis Barnavelt) 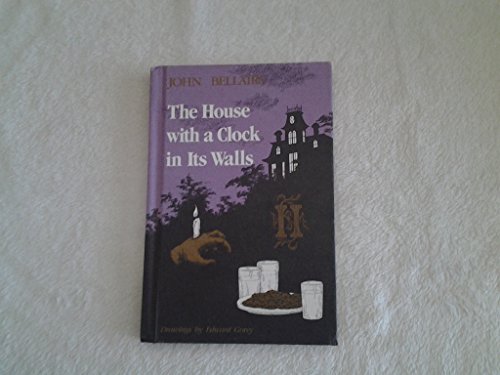 Orphaned Lewis Barnavelt tries to help his uncle Jonathan and next-door neighbor turn back the hands of time and save the world from the disaster that will begin when the clock stops ticking within the walls of Jonathan's house. Reissue. NYT. PW.

Lewis always dreamed of living in an old house full of secret passageways, hidden rooms, and big marble fireplaces. And suddenly, after the death of his parents, he finds himself in just such a mansion--his Uncle Jonathan's. When he discovers that his big friendly uncle is also a wizard, Lewis has a hard time keeping himself from jumping up and down in his seat. Unfortunately, what Lewis doesn't bank on is the fact that the previous owner of the mansion was also a wizard--but an evil one who has placed a tick-tocking clock somewhere in the bowels of the house, marking off the minutes until the end of the world. And when Lewis accidentally awakens the dead on Halloween night, the clock only ticks louder and faster. Doomsday draws near--unless Lewis can stop the clock!

This is a deliciously chilling tale, with healthy doses of humor and compassion thrown in for good measure. Edward Gorey's unmistakable pen and ink style (as seen in many picture books, including The Shrinking of Treehorn and Old Possum's Book of Practical Cats) perfectly complements John Bellairs's wry, touching story of a lonely boy, his quirky uncle, and the ghost of mansions past. (Ages 9 to 12) --Emilie Coulter

John Anthony Bellairs (1938 1991) is an award-winning American author, perhaps best known for his fantasy novel The Face in the Frost. He is also the author of many gothic mystery novels for children and young adults, including The House with a Clock in its Walls (which received both the New York Times Outstanding Book of Award and the American Library Association Children's Books of International Interest Award), The Lamp from the Warlock’s Tomb (which won the Edgar Allen Poe Award), and The Specter from the Magician’s Museum (which won the New York Public Library "Best Books for the Teen Age" Award.

1. THE HOUSE WITH A CLOCK IN ITS WA

2. THE HOUSE WITH A CLOCK IN ITS WA

3. The House With A Clock In Its Walls (lewis Barnavelt)