Items related to The Best Man 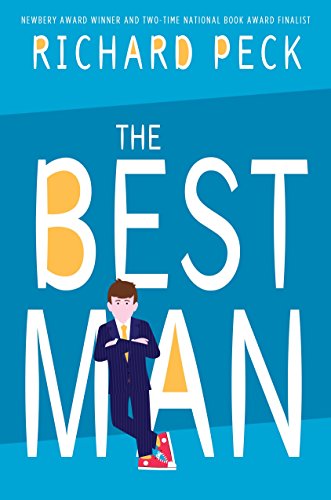 Newbery Medalist Richard Peck tells a story of small-town life, gay marriage, and everyday heroes in this novel for fans of Gary Schmidt and Jack Gantos.

Archer Magill has spent a lively five years of grade school with one eye out in search of grown-up role models. Three of the best are his grandpa, the great architect; his dad, the great vintage car customizer,; and his uncle Paul, who is just plain great. These are the three he wants to be. Along the way he finds a fourth—Mr. McLeod, a teacher. In fact, the first male teacher in the history of the school.

But now here comes middle school and puberty. Change. Archer wonders how much change has to happen before his voice does. He doesn't see too far ahead, so every day or so a startling revelation breaks over him. Then a really big one when he's the best man at the wedding of two of his role models. But that gets ahead of the story.

In pages that ripple with laughter, there's a teardrop here and there. And more than a few insights about the bewildering world of adults, made by a boy on his way to being the best man he can be.

RICHARD PECK (1934-2018) was born in Decatur, Illinois and lived in New York City for nearly 50 years. The acclaimed author of 35 novels for children and young adults, he won the Newbery Medal for A Year Down Yonder, a Newbery Honor for A Long Way from Chicago, the Scott O’Dell Award for The River Between Us, the Edgar Allen Poe Award for Are You in the House Alone?, a Boston Globe-Horn BookAward Honor for The Best Man, and the Christopher Medal for The Teacher’s Funeral. He was the first children’s author ever to have been awarded a National Humanities Medal, and was twice a National Book Award Finalist.

Boys aren’t too interested in weddings. Girls like them. Grown-ups like them. But my first-grade year started with one wedding, and my sixth ended with another. Call my story “A Tale of Two Weddings.” I was in both of them.

One of the weddings was great. In fact, it’s just over. There’s still some cake. And I got a fantastic new suit out of it. The pants are cuffed. The coat gives me shoulders, and I’ll be sorry to outgrow it. I won’t mind being taller, but I’ll miss the suit.

Also, a pair of gold cuff links are involved, but we’ll come to them later.

The other wedding, the first one, was a train wreck, so let’s get that one out of the way. Besides, it happened when I was too little to know what was happening or to stand up for my rights. I didn’t have any rights. I was six.

Did I even know what weddings are? And this one wasn’t even anybody in our family.

“Archer, honey,” said Mom one day. I was in her office for some reason I didn’t see coming. Mom’s maiden name was Archer. I’m named for her kid brother, Paul Archer.

Mom was about to pull me onto her lap. But I held up both hands. They were red and black with touch-up paint. I was paint all over. I’d sat in some. Dad and I had been out in the garage detailing a vintage ’56 Chevy Bel Air.

Mom pulled back, but only a little. “There’s going to be a wedding, and guess what? You get to be in it.”

“Get Holly,” I said. Holly’s my sister, seven years older, so she’d have been thirteen or so.

“We already have Holly,” Mom said. “She’s going to be a junior bridesmaid. She’s tickled pink.”

“You carry the bride’s ring down the aisle on a little satin pillow.”

“You won’t be alone,” Mom said. “Don’t worry about that. There’ll be another ring bearer. She’ll carry the groom’s ring.”

“Her mother and I went to college together. We were best buds in the Tri Delt House. The Stanleys have moved here for the schools, so you and Lynette will be starting first grade together, and you’ll already be friends!” Mom beamed.

How could I be friends with a girl? I stood there, waiting to wake up from this bad dream.

“Archer, honey, you don’t have regular clothes,” Mom said. “And by the way, racing-stripe paint doesn’t come out in the wash. I suppose your dad’s in about the same condition.”

“We’ll look at what you’ll wear for the wedding a little later on.” Mom glanced away. “A little closer to the event.”

I racked my six-year-old brain. There had to be a way out of this. There’s always a way out when you’re six, right? “Who are they, these people getting married?”

Mom was looking away, far, far away. “The bride is Mrs. Ridgley’s granddaughter,” she said.

“An old friend of your grandmother Magill.”

“Were they best buds in the Tri Delt House?”

“No,” Mom said. “They were best buds at the Salem witch trials.”
Chapter 2

Every hot August day brought the wedding closer. My sister, Holly, came home from camp and pounded up to her room to try on her junior bridesmaid dress. She about wore it out before the day came. But the day came.

So did my ring-bearer rig, my first FeEx delivery. Mrs. Addison Magill had sent for it—Grandma. I couldn't read it, but I knew that much. "Archer," Mom said, "whatever it is, you'll have to wear it. I do my best with your grandmother Magill, but it's never good enough. Never. Be a brave boy."

It was going to be a simple porch wedding, Grandma's porch. They wouldn't even need a rehearsal, which was fine with me. I didn't know what a rehearsal was. Just a gathering of friends. No fuss.

But a hundred and twenty-five chairs were set up on the front lawn when the wedding day dawned. We live behind my grandparents. Two big square houses. Grandpa Magill built them.

Dad stayed down in the garage as long as he could. But time ran out for him too.

I crouched at the end of my bed. I couldn't sit all the way down on my ring-bearer's rig.

An idea hit me—the best idea I'd ever had in my life. I'd go hide, and after a while they'd forget they'd ever had me.

I know. A few months older—a few weeks—and I'd have seen all the bugs in this plan. The first thing you learn in school is that there's no place to hide.

I vanished while the coast was clear. Not easy in those shoes. Even the soles seemed to be patent leather. I skidded past Holly's room. And Mom and Dad's, where Mom was tying Dad's tie. Then I was outdoors and across the alley to Grandpa and Grandma's. August sun glinted off me. I was all in white like the bride.

I came across Grandpa Magill, in the porch swing Dad had set up for him in our backyard. He wore his seersucker suit and a straw hat, and was sound asleep. Cleo the cat was in his lap. She glanced up at me, then stared. Even to the cat I looked ridiculous. Up at the back of Grandma and Grandpa's house, uniformed people were putting glasses on trays. The wedding cake stood under a plastic sheet. I wouldn't have said no to a piece of cake, but I had some disappearing to do.

Now I was moving from one snowball bush to the next, along the side of the house, and the front porch. I slid back a piece of loose latticework down low and slipped inside. Now you see me, now you don't.

I'd been down here under the porch before, making a fort, messing around. It's a cool, webby place with some mud. I was inches from the wedding, but totally invisible.

Footsteps thundered on the porch floor above. Murmuring came from the folding chairs in the yard. A string quartet tuned up directly over my head. Then I got a big surprise.

A face appeeared in the open space I'd come through. I jumped, and cracked my head on a beam. A girl ducked inside. She had a mop of red hair with a big pink bow in it. You could just stand up in here, if you were six. She was a little bigger than I was, all the way around.

Her skirt was a lot of peachy pink net. We seemed to be wearing matching shoes. "Hey, bozo, you're supposed to be on the porch, not under it," the girl said. "What are you, five?"

It was Lynette Stanley, of course.

"I saw you from the living room window." She jerked a thumb over her shoulder. Her dress had weird puffy sleeves.

"Who could miss you in all that white? You look like a snow cone."

It was dim down here, but Lynette Stanley got a good look at me.

"White velvet shorts?" she said. "What were they thinking?"

"They're really tight on you."

Tighter than she knew. I coudn't sit down.

I wasn't wearing anything underneath. How could I? And I was beginning to chafe.

"It's like you drink out of a sippy cup. And look at your shirt. You've got more ruffles down your front than I do."

She held out her skirt. "And I look like Fancy Nancy."

Her dress was a lot of net, a lot of sash, those ruffles. Dorky. She'd had a FedEx delivery too. Above us the string quartet went into "You Are the Wind Beneath My Wings."

"Are you nuts?" she said. "We're already late. They'll be panicking. They'll be on their phones. It'll be an Amber Alert."

Lynette sighed and made a grab for me. She was planning to frog-march me out from under the porch or something. I jumped back. My slick shoes shot out from under me. I sat down hard, and my hands slapped mud. We heard the sound of stitches popping.

Something inside me had known this wasn't going to work. A sob started up, behind the baby-blue velvet bow tie.

Book Description Hardcover. Condition: New. Hardcover. Newbery Medalist Richard Peck tells a story of small-town life, gay marriage, and everyday heroes in this novel for fans of Gary Schmidt and Jack Gantos. Archer Magill has spent a lively f.Shipping may be from multiple locations in the US or from the UK, depending on stock availability. 240 pages. 0.567. Seller Inventory # 9780803738393