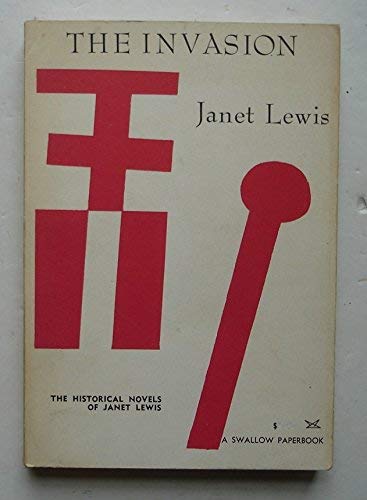 The Invasion, a novel originally published in 1932, marked the debut of historical novelist Janet Lewis, who went on to write numerous poems and short stories as well as the novels The Wife of Martin Guerre and The Trial of Soren Quist. Lewis grew up in the Lake country of the Old Northwest and The Invasion is based on family stories she heard as a child.The Invasion displays well-researched historical accuracy, an innate understanding of and feeling for Native American culture enhanced by the author's fluency in the Ojibway language, and an economy of style that is remarkable for a first novel.       In 1790, John Johnston, a cultivated young Irishman, came to the far corner of the Northwest Territory to make his fortune intending to spend only a year. Instead he married Ozhah-guscoday- wayquay (The Woman of the Glade), daughter of the Ojibway chief Waub- ojeeg, and settled on the St. Mary's River. Together they founded a family that

Janet Lewis was born in Chicago in 1899. In 1922, she published her first volume of poetry, The Indians in the Woods. Lewis' first novel was The Invasion: A Narrative of Events Concerning the Johnston Family of St. Mary's (1932). She married author Yvor Winters in 1926, with whom she founded Gyroscope (1929-1931), an influential literary journal that served as center for a group led by Winters. She continued to write poetry throughout her life. She is best known for her historical fiction and is also the author of a volume of short fiction. She taught creative writing and literature courses at Stanford University and the University of California, Berkeley. Janet Lewis died in 1998, at the age of 99.

Seldom has an American writer come into possession of such a body of virgin ore. Rarely has such material found an artist so scrupulous, so delicate, so reverent. -- Robert Morss Lovett, The New Republic

The Invasion . . . is a confident, pungently written first book, with close attention paid to the densities, the shading, and the smells of the Northern forests and its peoples, at the time when the Americans first came to them. -- Larry McMurtry, The New York Review of Books

1. The Invasion: A Narrative of Events concerning the Johnston Family of St. Mary's

2. Invasion : A Narrative of Events Concerning the Johnston Family of St. Mary's