Items related to City on Fire 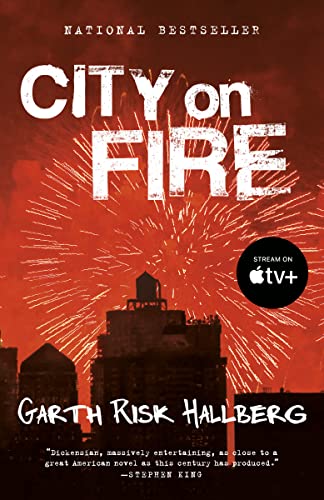 One of the Best Books of the Year: The Washington Post, Los Angeles Times,  NPR, Vogue, San Francisco Chronicle, The Wall Street Journal

New York City, 1976. Meet Regan and William Hamilton-Sweeney, estranged heirs to one of the city’s great fortunes; Keith and Mercer, the men who, for better or worse, love them; Charlie and Samantha, two suburban teenagers seduced by downtown’s punk scene; an obsessive magazine reporter and his idealistic neighbor—and the detective trying to figure out what any of them have to do with a shooting in Central Park on New Year’s Eve.
The mystery, as it reverberates through families, friendships, and the corridors of power, will open up even the loneliest-seeming corners of the crowded city. And when the blackout of July 13, 1977, plunges this world into darkness, each of these lives will be changed forever. City on Fire is an unforgettable novel about love and betrayal and forgiveness, about art and truth and rock ’n’ roll: about what people need from each other in order to live—and about what makes the living worth doing in the first place.

An Amazon Best Book of October 2015: Find a comfortable chair, a lamp, and mix yourself a Manhattan, because this book is going steal your time and throw you into the swirling mayhem of 1970s New York City – where the lives of the wealthy, punks, artists, cops, anarchists, and fleeing teens collide – and you are not going to want it to end. Garth Risk Hallberg has not only written one of the most anticipated debuts of the year, but has done so with enormous ambition and giddy success. Told through multiple perspectives, Hallberg’s novel reveals a vast and varied web of characters whose lives intertwine around a shooting and the New York City blackout of 1977. This is a novel of America, of hopes and dreams, of old money a la F. Scott Fitzgerald, of families and rebellion and how “no matter what you deserve, how far you run, your fate stays stuck to your heels.” Rendered with cinematic detail and crisp-cracking prose, Garth Risk Hallberg’s City on Fire is electric. --Al Woodworth

Garth Risk Hallberg's first novel, City on Fire, was a New York Times and international bestseller, has been translated into 17 languages, and was named one of the best books of 2015 by The Washington Post, Los Angeles Times, San Francisco Chronicle, The Wall Street Journal, NPR, and Vogue. He is also the author of a novella, A Field Guide to the North American Family. His short stories have appeared in Prairie Schooner, Glimmer Train, and Best New American Voices 2008, and he has written critical essays for The New York Times Book Review, The Guardian, The Millions, and Slate. A two-time finalist for the National Book Critics Circle's award for Excellence in Reviewing, he lives in New York with his wife and children.