Items related to A Waka Anthology - Volume One: The Gem-Glistening Cup

Edwin A. Cranston A Waka Anthology - Volume One: The Gem-Glistening Cup

A Waka Anthology - Volume One: The Gem-Glistening Cup 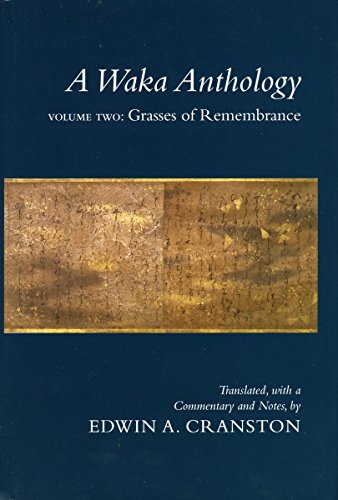 This is the first of four monumental volumes that will carry the story of Waka, the classical tradition of Japanese poetry, from its beginnings in ancient song to the sixteenth century. The present volume contains almost 1,600 songs and poems and covers the period from the earliest times to 784.

This is the first of four monumental volumes that will carry the story of waka, the classical tradition of Japanese poetry, from its beginnings in ancient song to the sixteenth century. The present volume, which contains almost 1,600 songs and poems, covers the period from the earliest times to 784, and includes many of the finest works in the literature as well as providing evocative glimpses of the spirit and folkways of early Japanese civilization. For a poetry anthology, the volume has a great deal of prose. Some of this consists of translations of prose settings where available, because the poems often form part of a literary whole with their attendant prose, such integration being a characteristic feature of early Japanese literature. But the great bulk of the prose is the extensive commentary; a special feature of this anthology; arranged so as to introduce the poems and to provide historical, biographical, and literary information that allows for a full appreciation of the poems. The combination of poems, prose settings, and commentary makes this work a unique contribution to the study of Japanese poetry. The translations of the poems aim to be both faithful to the original and alive as literature, with great attention paid to nuance, cadence, and tone. The author writes: "The people who utter the poems in this book are real to me, whether I know their biographies or not. Their loves and hates (and admiration of mountains and trees) are not other than my own. And so l have not hesitated to bring myself to this book." The texts drawn upon for the poems are the ancient chronicles Kojiki, Nihonshoki, and Shoku Nihongi; the fudoki, a set of eighth-century local gazetteers; Man'yoshu, the massive eighth-century compendium of early poetry (about one fourth of that work is included); and the Bussokuseki poems carved on a stone tablet at a temple in Nara. All poems are presented in facing romanization and translation. The book contains a glossary, notes, bibliography, two conversion tables, index of poems by author, first-line index, and general index.

Edwin A. Cranston is Professor of Japanese Literature at Harvard University.