Items related to I Am a Cat (Tuttle Classics)

Soseki Natsume I Am a Cat (Tuttle Classics)

I Am a Cat (Tuttle Classics) 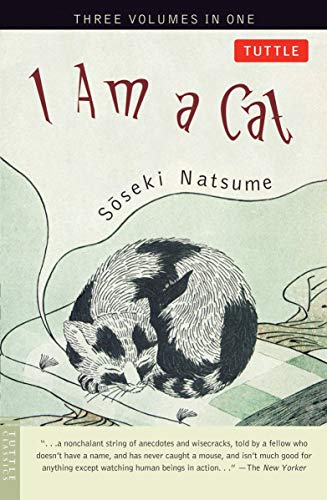 "A nonchalant string of anecdotes and wisecracks, told by a fellow who doesn't have a name, and has never caught a mouse, and isn't much good for anything except watching human beings in action..." —The New Yorker

Written from 1904 through 1906, Soseki Natsume's comic masterpiece, I Am a Cat, satirizes the foolishness of upper-middle-class Japanese society during the Meiji era. With acerbic wit and sardonic perspective, it follows the whimsical adventures of a world-weary stray kitten who comments on the follies and foibles of the people around him.

A classic of Japanese literature, I Am a Cat is one of Soseki's best-known novels. Considered by many as the most significant writer in modern Japanese history, Soseki's I Am a Cat is a classic novel sure to be enjoyed for years to come.

Born Natsume Kinnosuke, Soseki was brought up in a middle-class family at the beginning of the Meiji period. After an extensive education in English, Chinese, and Japanese literature, Soseki taught English at the University of Tokyo. In 1907, he gave up teaching to devote himself to writing and produced many books, including Botchan, The Three-Cornered World, and Mon. He died in Tokyo in 1916.

2. I Am a Cat (Paperback or Softback)

Book Description Tuttle Publishing, United States, 2002. Paperback. Condition: New. New edition. Language: English. Brand new Book. Cat lovers will delight in the thoughts of a cat whose particular joy in life is commenting on the folly of human beings. Based on a nameless cat's observations of upper-middle-class Japanese society of the Meiji era, the essence of I AM A CAT is its humour and sardonic truths. Written over the course of 1904-06, this book is full of acerbic wit as it follows the whimsical adventures of a world-weary stray kitten. Seller Inventory # ABZ9780804832656

Book Description Paperback. Condition: New. New edition. Paperback. Written over the course of 1904-6, Soseki's comic masterpiece, I Am a Cat satirizes the follies of upper-middle-class Japanese society during the Meiji era. With acerbic wit and sardonic p.Shipping may be from multiple locations in the US or from the UK, depending on stock availability. 480 pages. 0.480. Seller Inventory # 9780804832656