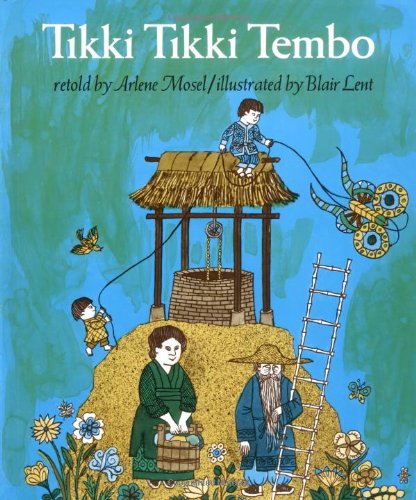 Three decades and more than one million copies later children still love hearing about the boy with the long name who fell down the well. Arlene Mosel and Blair Lent's classic re-creation of an ancient Chinese folktale has hooked legions of children, teachers, and parents, who return, generation after generation, to learn about the danger of having such an honorable name as Tikki tikki tembo-no sa rembo-chari bari ruchi-pip peri pembo.

If you haven't already read Tikki Tikki Tembo, you've probably heard at least someone recite the deliriously long name of its protagonist: Tikki tikki tembo-no sa rembo-chari bari ruchi-pip peri pembo, by now a famous refrain in most nursery schools. In this beautiful edition--complete with line and wash illustrations by artist Blair Lent--Arlene Mosel retells an old Chinese folktale about how the people of China came to give their children short names after traditionally giving their "first and honored" sons grand, long names. Tikki tikki tembo (which means "the most wonderful thing in the whole wide world") and his brother Chang (which means "little or nothing") get into trouble with a well, are saved by the Old Man with the Ladder, and change history while they're at it. Tikki Tikki Tembo is a perfect book to read aloud, but don't be surprised if you find yourself joining the ranks of its chanting followers. (Picture book)

Arlene Mosel (1921-1996) first heard the story of Tikki tikki tembo as a child. When she grew up, she shared this wonderful tale with countless children, including her own. Because so many young listeners responded enthusiastically, she decided to write her own retelling, and Tikki Tikki Tembo became her first book for children. The book was named an American Library Association Notable Book and won the Boston Globe-Horn Book Award. In 1997, The New York Times named it one of the best 50 children’s books of the previous 50 years. Mosel was also the author of The Funny Little Woman, which won the 1973 Caldecott Medal for Blair Lent’s illustrations and was recognized as an Honor Book by the Hans Christian Andersen International Children’s Book Awards. Mosel was an associate professor of library science at Case Western Reserve University. Born in Cleveland, Ohio, Mosel died in Indianapolis in 1996. Blair Lent began illustrating picture books in the 1960s. He received the Caldecott Medal in 1973 for The Funny Little Woman, by Arlene Mosel, and has also been awarded three Caldecott Honors. He lives and works in Cambridge, Massachusetts.