Science's Trickiest Questions: 402 Questions That Will Stump, Amuse, and Surprise 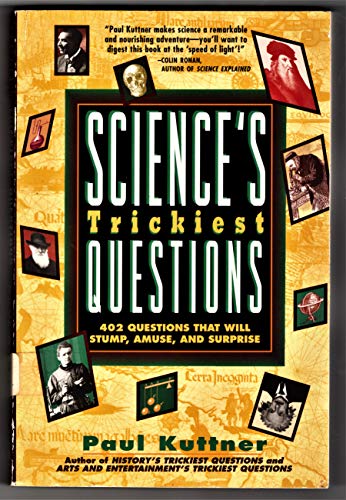 Gathers questions and answers about the natural world, the human body, the earth, geometry, chemistry, and physics

Have you ever wondered where the writers for Jeopardy get their material? If only this weren't a new book, it would be one primary source. Although it is written in normal, non-Jeopardy style--questions first--it's easy to imagine, for instance, Alex Trebek saying, "The results of this prominent Jewish pathologist and bacteriologist's research probably saved Adolf Hitler's eyesight and life after a World War I chlorine gas attack," and you, en route to becoming a quiz-show whiz, correctly asking, "Who was Eugen Fraenkel?" (Well, maybe not.) If you're into really obscure scientific trivia, you'll be in hog heaven with this book, even though, what with all the questions in front and all the answers in back, you're required to become a flip-maniac. But for the answer, "Ada Byron, the daughter of the English poet Lord Byron," you're willing, right? (The question for that one is, by the way, "Who first published instructions on how a computer could be made to work?") Jon Kartman