Items related to An Army at Dawn

Atkinson, Rick An Army at Dawn 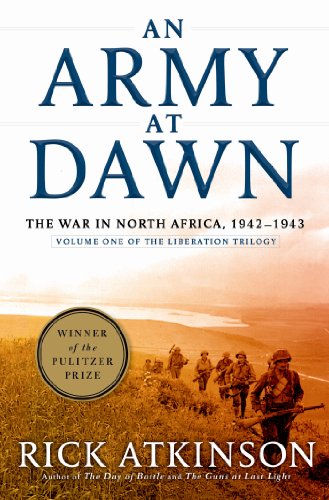 In the first volume of his monumental trilogy about the liberation of Europe in WW II, Pulitzer Prize winner Rick Atkinson tells the riveting story of the war in North Africa

The liberation of Europe and the destruction of the Third Reich is a story of courage and enduring triumph, of calamity and miscalculation. In this first volume of the Liberation Trilogy, Rick Atkinson shows why no modern reader can understand the ultimate victory of the Allied powers without a grasp of the great drama that unfolded in North Africa in 1942 and 1943. That first year of the Allied war was a pivotal point in American history, the moment when the United States began to act like a great power.

Beginning with the daring amphibious invasion in November 1942, An Army at Dawn follows the American and British armies as they fight the French in Morocco and Algeria, and then take on the Germans and Italians in Tunisia. Battle by battle, an inexperienced and sometimes poorly led army gradually becomes a superb fighting force. Central to the tale are the extraordinary but fallible commanders who come to dominate the battlefield: Eisenhower, Patton, Bradley, Montgomery, and Rommel.

Rick Atkinson, recipient of the 2010 Pritzker Military Library Literature Award for Lifetime Achievement in Military Writing, is the bestselling author of The Day Of Battle, The Long Gray Line, and In the Company of Soldiers. He was a staff writer and senior editor at The Washington Post for twenty years, and his many awards include Pulitzer Prizes for journalism and history. He lives in Washington, D.C.

Book Description Soft cover. Condition: New. ADVANCED READER'S EDITION. REAR ADVANCE READER'S EDITION - NEW & UNREAD - no flaws or defects - SOFT COVER IN PICTORIAL WRAPS as issued. THIS IS AN INTRODUCTORY PRICE FOR OUR GRAND RE-OPENING. ALL PRICES WILL BE ADJUSTED LATER TO REFLECT MARKET PRICES. ALL BOOKS HAVE BEEN BOXED IN CLIMATE CONTROLLED STORAGE AND HAVE NOT BEEN TOUCHED BY ANY OTHER HUMAN THAN ME FOR AT LEAST THE LAST 10 YEARS - ALL BOOKS ARE SEALED AND BUBBLE WRAPPED AND SHIPPED IN BOXES - YOU CAN BUY HERE WITH CONFIDENCE KNOWING THAT A BUNCH OF RANDOM PEOPLE HAVE NOT TOUCHED YOUR BOOK - WE ALSO ACCEPT OFFERS ON OUR BOOKS, BECAUSE WE WANT TO HELP DURING THIS LOCKDOWN WHERE WE ARE PRACTICING SOCIAL DISTANCING -. Seller Inventory # 008217

An Army at Dawn Format: Hardcover

An Army at Dawn: The War in North Africa, 1942-1943, Volume One of the Liberation Trilogy (Hardback or Cased Book)

An Army at Dawn: The War in North Africa, 1942-1943, Volume One of the Liberation Trilogy (Hardcover)