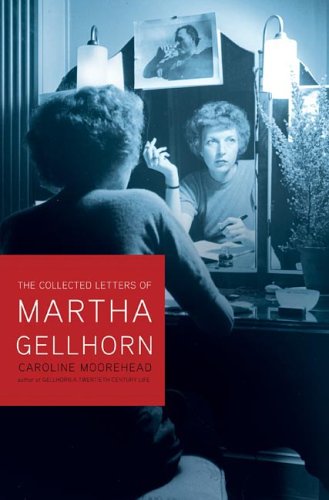 From Martha Gellhorn's critically acclaimed biographer, the first collected letters of this defining figure of the twentieth-century

Martha Gellhorn's heroic career as a reporter brought her to the front lines of virtually every significant international conflict between the Spanish Civil War and the end of the Cold War. While Gellhorn's wartime dispatches rank among the best of the century, her personal letters are their equal: as vivid and fascinating as anything she ever published.

Gellhorn's correspondence from 1930 to 1996--chronicling friendships with figures as diverse as Eleanor Roosevelt, Leonard Bernstein, and H. G. Wells, as well as her tempestuous marriage to Ernest Hemingway--paint a vivid picture of the twentieth century as she lived it.

Caroline Moorehead, who was granted exclusive access to the letters, has expertly edited this fascinating volume, providing prefatory and interstitial material that contextualizes Gellhorn's correspondence within the arc of her entire life. The letters introduce us to the woman behind the correspondent--a writer of wit, charm, and vulnerability. The result is an exhilarating, intimate portrait of one of the most accomplished women of modern times.

A distinguished biographer, Caroline Moorehead has also served as a columnist on human rights for two British newspapers. She is the author of Gellhorn (0-8050-7696-4) and lives in London.

Martha Gellhorn belonged to the age - perhaps the last age - when writing letters was a natural part of life. As a reporter and a novelist, with a precise eye for detail, she was also herself a natural letter writer, and all her life she used letters as a prism through which to filter what she saw and heard, and as a way of keeping close to her friends. She wrote more or less as she spoke, with humor and self-deprecation, full of fury about corrupt and evil governments. She wanted to make her friends laugh and she also wanted to talk to them, for conversation was what she really enjoyed. Letters were talk. "I felt like talking today," she wrote to Victoria Glendinning toward the end of her life, explaining the reason for her particularly long letter, "and felt like talking about books."

Because there was seldom a significant stretch of time when Martha was not moving around, letters were what held her life together. She started traveling at the age of twenty and never stopped. "I have only to go to a different country, sky, language, scenery to feel it is worth living," she told a friend when she was in her late seventies. Martha wrote letters every day, often describing the same particularly significant episodes to several people. When troubling things happened, she wrote them out, in long, anguished passages, as if only by writing could she lessen her own sense of grief. Then, often, she would write the whole thing again later, as a short story or novella or a scene in a novel. "The only way I can make it seem real to me is to write," she told Bernard Berenson.

In an afterword to the 1986 Virago edition of A Stricken Field, a novel about Czechoslovakia in 1939 and written at the time, Martha lamented the fact that she had never kept a "writer's compost heap" of diaries, journals, notes, or photographs. The archive of her past was "a poor thing, limited and fragmentary"; furthermore, her memory was terrible and she forgot everything. What she did not take into account then were her letters. And even if she did not keep them, others did. Read together, with her erratic spelling and her particular use of words, they provide an immediate and intimate portrait of a remarkable life.

Martha's letters are very seldom about social life, though she could be sharp and witty when in large gatherings. She loathed parties, formal dinners, and public life and was easily bored. She really did not mind what people thought about her and was not interested in trying to please. What she liked was friendship and love, in all their guises. To friends and lovers, to her mother, brother, adopted son and stepson, she wrote affectionately and often, though when angry, she could be harsh. She saw things in words, and liked to describe what she saw, heard and thought. Her letters are about the inner life, the excitements of youth and work and love affairs, the toughness of trying to write, the despair and loneliness of old age. Politics fascinated her: gossip did not. Malice, she would say, was not acceptable; hatred was. There are many references to American foreign policy, about which she was both highly critical and very apprehensive, long before the U.S.A. inspired alarm in others. It was soon after the war in Vietnam that Martha began warning about the rise of the Christian right and the dangers of American intervention in other parts of the world. A passionate liberal all her life and fired, from a very young age, by a strong sense of the injustice in the world, Martha could be impatient and intemperate over the question of Israel and the Palestinians; going into Dachau with the American army at the end of the Second World War had closed her mind forever against anything but the sanctity of an Israeli state, and many of her friends, both on paper and in conversation, preferred to avoid the subject. Apart from this, there were no taboos.

There are many letters about books and writers, those she admired - Joseph Heller, Peter Matthiesen, Henry James, Trollope - and those who she could never come to grips with, like Proust. But above all, Martha's letters are about survival, about the struggles of life, how to keep going, how to do no harm to others and attain some degree of happiness oneself. "From the onset of observation until death," she told her stepson Sandy, "life is a problem for one who lives it." George Kennan once said to her that her letters were her "real genre, and it is where you yourself come through most genuinely and convincingly."

The letters collected in this volume are a fraction of the number she wrote in her lifetime, many of them now held with her papers at the Howard Gotlieb Archival Center at Boston University. In order to include as many as possible, and to avoid repetition, I have cut, sometimes heavily, within the letters themselves. Major cuts are marked by dots; minor ones are not. One of her letters to David Gurewitsch, written over several days, runs to forty-seven typed pages; another, to Sandy Gellhorn, written over a month as a diary from Africa, to over thirty. In each case, I have selected just a few pages. Because Martha, particularly at the beginning of a friendship, often wrote letter after letter, day after day - exploring the limits of that friendship in a way more usual in a conversation than in a letter - I have included several examples, to illustrate how easy and pleasurable she found intimacy. Her letters to William Walton - briefly a lover but for many years a friend - in the 1940s and 1950s, and those to Betsy Drake in the 1970s and 1980s, belong to this category. Again, what appears here is only a fraction of what she wrote to them.

Martha had an enormous number of friends. Though she told Rosamond Lehmann that her five closest friends had all been men, and that the world she loved was one of "men, and not the world of men and women," she became increasingly close to women as the years passed, and it was to them that many of her most revealing and intimate letters were written. Though she repeatedly professed contempt for self-analysis, and at times displayed a remarkable lack of self-awareness, few people have written so perceptively and with such candor about themselves.

Martha's principal correspondents were: her mother Edna, to whom she wrote almost every day for forty years; Ernest Hemingway, with whom she lived on and off for eight years, though they were married for just four of them; Sandy Gellhorn, her adopted son, and Sandy Matthews, her stepson by her second husband, Tom Matthews; Hortense Flexner, who taught her at Bryn Mawr; Eleanor Roosevelt, who befriended her in 1936; Sybille Bedford, Betsy Drake, Lucy Moorehead, Diana Cooper, Robert Presnell, Leonard Bernstein, William Walton, George Paloczi-Horvath, and Moishe Pearlman; and, toward the end of her life, Victoria Glendinning, James Fox, Nicholas Shakespeare, and John Hatt. Many of them were given nicknames - Walton was Trolleycar, Hunk of Despair, Pieface; Hemingway, Bug, Pup-Pup, and even Mucklebugetski - though with her younger friends toward the end of her life she used terms of endearment. James Fox was "My favourite James in all the world." Affectionate and attentive with those she was fond of, Martha could also be unsentimental when they died. She dealt with partings and deaths with clarity, resignation, and a kind of brutality. When things ended - affairs, marriages, friendships - she packed, left, cut herself off, moved on. There was little looking back, few regrets. The only exceptions were her mother, whose death she mourned for the rest of her life, and her adopted son Sandy, about whom she worried constantly.

When she sold her cottage in Wales, a few years before her death, Martha made a bonfire of some of her more personal letters. In those flames went virtually her entire correspondence with her mother, and her letters to Tom Matthews, James Gavin, and Laurence Rockefeller. I have been unable to trace her letters to Nadezhda Mandelstam, George Kennan, and John Pilger, all important correspondents.

But most of the rest of her life - the wars, the books, the friends, the love affairs - is here, from the day when, at the age of twenty-two, she first arrived with her typewriter in Paris, excited, expectant, hungry for everything.