Items related to The Life of David (Jewish Encounters)

The Life of David (Jewish Encounters) 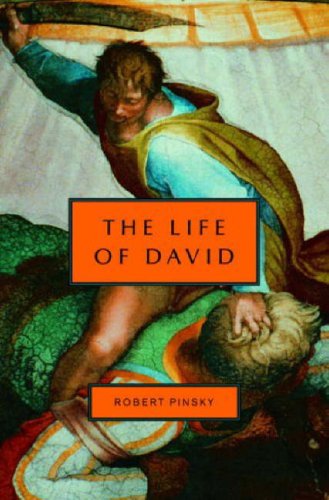 Part of the Jewish Encounter series

Poet, warrior, and king, David has loomed large in myth and legend through the centuries, and he continues to haunt our collective imagination, his flaws and inconsistencies making him the most approachable of biblical heroes. Robert Pinsky, former poet laureate of the United States, plumbs the depths of David’s life: his triumphs and his failures, his charm and his cruelty, his divine destiny and his human humiliations. Drawing on the biblical chronicle of David’s life as well as on the later commentaries and the Psalms—traditionally considered to be David’s own words—Pinsky teases apart the many strands of David’s story and reweaves them into a glorious narrative.

Under the clarifying and captivating light of Pinsky’s erudition and imagination, and his mastery of image and expression, King David—both the man and the idea of the man—is brought brilliantly to life.

Robert Pinsky is the author of many books of poetry, including Jersey Rain and The Figured Wheel, and of the award-winning translation The Inferno of Dante. His prose works include The Situation of Poetry and The Sounds of Poetry. He teaches in the graduate creative writing program at Boston University and lives in Massachusetts.

Think of David, and youthful images spring to mind. There is the boy with the slingshot, forever captured by Michelangelo, ready to take on the giant Goliath. There is the handsome king, in our Hollywood memory played by the young Gregory Peck, who seduces the fetching Bathsheba. But, as Robert Pinsky reminds us in his enriching The Life of David, the drama of David's life is not limited to his youth but extends throughout his 70 years: the upstart lad, the ambitious warrior, the capricious adulterer, the vengeful king, the conniving politician, the suffering father and finally the pathetic old man.

Pinsky -- a former poet laureate of the United States, translator of Dante's Inferno and writer of Book World's Poet's Choice column -- never presents David in isolation. We learn that he is neither Achilles nor Romeo, both of whom disappear while still young. David is not Lear, whom we see only in old age, or Beowulf, who is frozen in our minds as the grizzled warrior. "David's drama is that of a life entire," Pinsky writes. The literary references are everywhere -- The Arabian Nights, Scheherazade, Homer, Dryden, Raymond Chandler -- and so, perhaps less effectively, are references to him in contemporary culture -- "The Sopranos," Akira Kurosawa, Oprah, Saudi princes and Wall Street stockbrokers. But Pinsky also delves into rabbinic sources, enriching his narrative by drawing from the Talmud and from Louis Ginzberg's famous The Legends of the Jews.

In crafting his own take on a complex hero (this book is the first in a series of biographies called "Jewish Encounters," a collaborative effort between Schocken Books and the admirable Jewish cultural group Nextbook), Pinsky demonstrates a love for legend but little patience for apologetics. "Some of the sages," Pinsky writes, "go so far as to claim that David did not sin, that he contemplated the act with Bathsheba but did not go through with it!" Others insist that Uriah the Hittite, being a soldier, had given Bathsheba a bill of divorcement in case he should disappear in battle and thus exonerated David. Pinsky labels such interpretations "desperate" and "inventive almost beyond belief" and suggests that the rabbis who wrote them were "crazed by fasting and exile." He makes it clear that he is looking for the real David -- or as close as we can get to someone who lived nearly 3,000 years ago -- rather than some idealized version. "He must have actually existed, and most of it must be true," Pinsky writes, "because no people would deliberately invent a national hero so deeply flawed." David is indeed flawed, Pinsky adds, "flawed and chosen."

He also pops up in all sorts of interesting places in the Bible. There's no Book of David; rather, his story and his poetry ramble over several biblical books -- Samuel (1 and 2), Kings (1 and 2), Chronicles (1 and 2), Ruth, Psalms, Isaiah, Ezekiel and Jeremiah, not to mention the Gospels. As a student of the Bible, I knew most of the words and much of the lore that Pinsky cites, but I had never encountered them woven together so artfully and coherently.

Pinsky reprises the famous narratives of David -- Goliath, Bathsheba, Saul -- but he spends most of his book writing about David's often tragic relationships with his children. Retold here with fresh drama is the story of his eldest son, Amnon, who rapes his half-sister; of Adonijah, who tries to seize the throne; and of the king's youngest, Solomon, who is chosen by David over Adonijah. But the emotional highlight of David's story, as told here, is the death of the rebellious Absalom.

Pinsky, the critic, analyzes David's famous eulogy: "The king cried with a loud voice, O my son Absalom, O Absalom, my son, my son!" Pinsky writes, "The poet who wrote great elegies for Saul and Jonathan . . . here is neither stoical or eloquent. Or, his eloquence is in the repetition of a name -- and in what is probably hyperbole: 'Would God I had died for thee.' "

I always read a book with a mind to its motivation -- wondering why the author picked this topic. Pinsky never really shows his hand, but there is just a hint here that he wrote with his own father in mind. For one thing, the book is dedicated to the memory of his father, Milford Simon Pinsky. For another, the elder Pinsky makes a cameo appearance at the very end of the volume. In discussing David's legacy, Robert Pinsky writes about the Star of David. He focuses on one curious use of that image: a fading photograph from 1939 of 12 young men on a Jewish basketball team in Long Branch, N.J., known as the Jewish Aces. Sewn onto their uniforms is that six-pointed star made of two interlocking triangles. Pinsky goes on to name all 12 players, but the name Milford Pinsky jumps out at me. The son marvels over the ability of the father to wear the star with pride -- and a basketball in hand -- at a time when Europe's Jews were marked for extermination with the same symbol.

Were the real David to suddenly appear, he would not even recognize the symbol that bears his name and has been used both to ennoble and oppress. In fact, the Star of David didn't come into use until some thousand years after David's death. But, as Pinsky points out in large ways and small, as much as we try to capture David, he is forever larger than life.

1. The Life of David (Jewish Encounters)

Book Description Schocken, 2005. Soft cover. Condition: New. ADVANCED READER'S EDITION. ADVANCED READER'S EDITION. The book is in NEW & UNREAD condition, no flaws or defects - SOFT COVER IN PICTORIAL WRAPS as issued. THIS IS AN INTRODUCTORY PRICE FOR OUR GRAND RE-OPENING. ALL PRICES WILL BE ADJUSTED IN LATERTO REFLECT MARKET PRICES. ALL BOOKS HAVE BEEN BOXED IN CLIMATE CONTROLLED STORAGE AND HAVE NOT BEEN TOUCHED BY ANY OTHER HUMAN THAN ME FOR AT LEAST THE LAST 10 YEARS - ALL BOOKS ARE SEALED AND BUBBLE WRAPPED AND SHIPPED IN BOXES - YOU CAN BUY HERE WITH CONFIDENCE KNOWING THAT A BUNCH OF RAMDOM PEOPLE HAVE NOT TOUCHED YOUR BOOK - WE ALSO ACCEPT OFFERS ON OUR BOOKS, BECAUSE WE WANT TO HELP DURING THIS LOCKDOWN WHERE WE ARE PRACTICING SOCIAL DISTANTCING -. Seller Inventory # 001174

2. The Life of David (Jewish Encounters)

3. The Life of David

4. The Life of David (Jewish Encounters)

5. The Life of David (Jewish Encounters)

Book Description Condition: New. Poet, warrior, and king, David has loomed large in myth and legend through the centuries, and he continues to haunt our collective imagination, his flaws and inconsistencies making him the most approachable of biblical heroes. Robert Pinsky, former poet laureate of the United States, plumbs the depths of David?s life: his triumphs and his failures, his charm and his cruelty, his divine destiny and his human humiliations. Drawing on the biblical chronicle of David?s life as well as on the later commentaries and the Psalms?"?"traditionally considered to be David?s own words?"?"Pinsky teases apart the many strands of David?s story and reweaves them into a glorious narrative.Under the clarifying and captivating light of Pinsky?s erudition and imagination, and his mastery of image and expression, King David?"?"both the man and the idea of the man?"?"is brought brilliantly to life. Seller Inventory # 9780805242034

7. The Life of David (Jewish Encounters)