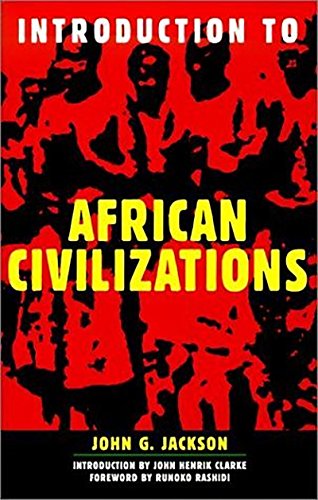 This work challenges all the standard approaches to the saga of African history, from the dawn of prehistory to the modern resurgent Africa of today.

"The picture we get today of Africa in past ages from the history taught in our schools is that Africans were savages and that, although Europeans invaded their lands and made slaves of them, they were in a way conferring a great favor on them, since they brought to them the blessings of Christian civilization," writes John G. Jackson.

With brilliantly objective scholarship, Jackson obliterates that picture in this book, and presents a picture of human heritage infinitely more rich, colorful, and varied than is generally understood. The book challenges all the standard approaches to African history and will, no doubt, disturb a large number of overnight "authorities" on Africa who will discover that they do not really know the depth of African history and the role that Africans played in creating early human societies.

Star-gods, moon-gods, sun gods, Osiris, the Zodiac, the lost continent of Atlantis--the impact of the myths and legends of ancient man upon human history is analyzed here. "Since the lore of astronomy and the calendar were the basis of much of the mythology, ritual, and religion of ancient Egypt, which in turn has profoundly affected all the great religious systems of later days," observes the author, "we deem it proper to discuss...these ancient African cults and creeds and their effects on other cultures."

In its panoramic view, from the dawn of prehistory to modern resurgent Africa, Introduction to African Civilizations challenges the parochial historian, devastates the theoretical pretensions of white supremacists, expands intellectual horizons. It is a fascinating book to be read and reread for pleasure and knowledge by the layman and the scholar.

"This is not just another book on African history. It is, in my opinion, one of the best books that has so far been written on the subject."--from the Introduction by John Henrik Clarke

Jackson was a highly respected historian and author. He lived and taught for many years in Chicago.

John Henrik Clarke was born in 1915 in Union Springs, Alabama, and was brought up in Columbus, Georgia. Editor, lecturer, writer, and teacher, Dr. Clarke lived in New York City from 1933 until his death in 1998.