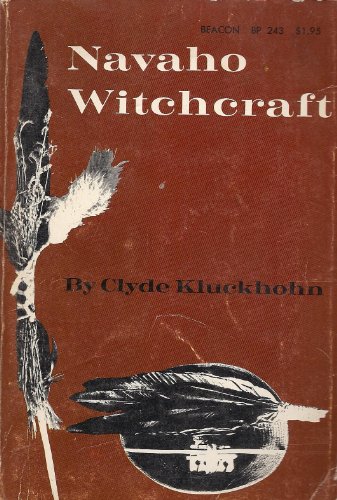 First published in 1944, Clyde Kluckhohn's Navajo Witchcraft offers a comprehensive analysis of witchcraft tradition in Navajo culture. As the main research source, 93 informants were interviewed by Kluckhohn. Among the sample, 76 people were men, 71 individuals were over fifty years old. It is important to note that 38 individuals were ceremonial practitioners who are skilled navigators of their folk knowledge. Based on the data which has been collected since 1923, the first draft was written in 1938, and it was rewritten several times for content revision and data addition. Navajo witchcraft consists of various techniques of malevolent activity which include "Witchery," "Sorcery," "Wizardry," and "Frenzy Witchcraft." Each technique is employed accordingly to a practitioner's purpose. For example, the flesh of a corpse is used in "Witchery," or Witcheryway to put a curse on an individual. Kluckhohn utilizes a functionalist interpretation method to explain the social validity of Navajo witchcraft. Navajo culture is a scarcity culture because of the semi-arid environment and over-grazing by livestock, making life harder for Navajos. In such living conditions, personal insecurity, intra-group tension, and aggression towards others arise among the members of the society. Kluckhohn argues that witchcraft exists as a channel for an individual's socially suppressed frustrations. Witchcraft is a road to supernatural power and power is a central theme in Navajo world view, therefore, its existence is socially accepted. Kluckhohn hypothesizes that socially accepted witchcraft serves as a remedy for hostility and anxiety, maintaining a social equilibrium in Navajo culture. There have been many criticisms made on the functionalism during this century, and one of the significant criticisms is the over emphasis on social equilibrium. Kluckhohn's functionalist interpretation has its own limitations.

Book Description Beacon Press. Paperback. Condition: GOOD. Has little wear to the cover and pages. Contains some markings such as highlighting and writing. Seller Inventory # 0807046213_abe_gd

Book Description Beacon Press, 1967. Condition: Good. A+ Customer service! Satisfaction Guaranteed! Book is in Used-Good condition. Pages and cover are clean and intact. Used items may not include supplementary materials such as CDs or access codes. May show signs of minor shelf wear and contain limited notes and highlighting. Seller Inventory # 0807046213-2-4