Items related to The Great Transformation 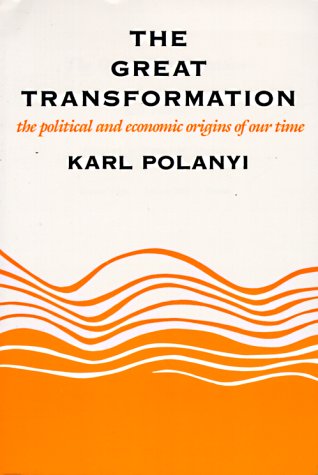 One of the twentieth century's most thorough and discerning historians, Karl Polanyi sheds "new illumination on... the social implications of a particular economic system, the market economy that grew into full stature in the nineteenth century." (R.M. MacIver)

Karl Polanyi (1886-1964) is considered one of the twentieth century's most discerning economic historians. He left his position as senior editor of Vienna's leading financial and economic weekly in 1933, became a British citizen, taught adult extension programs for Oxford and London Universities, and held visiting chairs at Bennington College and Columbia University. He is co-author of Christianity and the Social Revolution; author of The Great Transformation; Trade and Market in Early Empires (with C.Arnsberg and H.Pearson) and posthumously, Dahomey and the Slave Trade (with A.Rotstein).

Joseph E. Stiglitz was formerly chair of President Clinton's Council of Economic Advisors, and chief economist of the World Bank. He is professor of economics at Stanford University, and senior fellow at the Brookings Institution.

Fred Block is professor of sociology at the University of California, Davis.

As the Second World War was drawing to a close in 1944, two great works of political economy were published. One was Hayek's The Road to Serfdom, the driving force behind the free-market revolution in the final quarter of the twentieth century. The other was Karl Polanyi's The Great Transformation. . . . [It] is well worth reading. -Larry Elliott, The Guardian

4. The Great Transformation: The Political and Economic Origins of Our Time