Items related to An Indigenous Peoples' History of the United States...

An Indigenous Peoples' History of the United States (REVISIONING HISTORY) 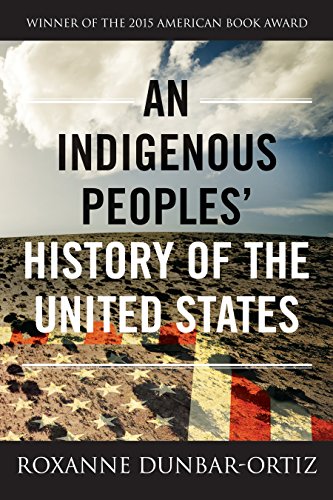 2015 Recipient of the American Book Award

Today in the United States, there are more than five hundred federally recognized Indigenous nations comprising nearly three million people, descendants of the fifteen million Native people who once inhabited this land. The centuries-long genocidal program of the US settler-colonial regimen has largely been omitted from history. Now, for the first time, acclaimed historian and activist Roxanne Dunbar-Ortiz offers a history of the United States told from the perspective of Indigenous peoples and reveals how Native Americans, for centuries, actively resisted expansion of the US empire.

In An Indigenous Peoples’ History of the United States, Dunbar-Ortiz adroitly challenges the founding myth of the United States and shows how policy against the Indigenous peoples was colonialist and designed to seize the territories of the original inhabitants, displacing or eliminating them. And as Dunbar-Ortiz reveals, this policy was praised in popular culture, through writers like James Fenimore Cooper and Walt Whitman, and in the highest offices of government and the military. Shockingly, as the genocidal policy reached its zenith under President Andrew Jackson, its ruthlessness was best articulated by US Army general Thomas S. Jesup, who, in 1836, wrote of the Seminoles: “The country can be rid of them only by exterminating them.”

Spanning more than four hundred years, this classic bottom-up peoples’ history radically reframes US history and explodes the silences that have haunted our national narrative.

Roxanne Dunbar-Ortiz grew up in rural Oklahoma, the daughter of a tenant farmer and part-Indian mother. She has been active in the international Indigenous movement for more than four decades and is known for her lifelong commitment to national and international social justice issues. After receiving her PhD in history at the University of California at Los Angeles, she taught in the newly established Native American Studies Program at California State University, Hayward, and helped found the Departments of Ethnic Studies and Women’s Studies. Her 1977 book The Great Sioux Nation was the fundamental document at the first international conference on Indigenous peoples of the Americas, held at the United Nations’ headquarters in Geneva. Dunbar-Ortiz is the author or editor of seven other books, including Roots of Resistance: A History of Land Tenure in New Mexico. She lives in San Francisco.

Under the crust of that portion of Earth called the United States of America—“from California . . . to the Gulf Stream waters”—are interred the bones, villages, fields, and sacred objects of American Indians. They cry out for their stories to be heard through their descendants who carry the memories of how the country was founded and how it came to be as it is today.

It should not have happened that the great civilizations of the Western Hemisphere, the very evidence of the Western Hemisphere, were wantonly destroyed, the gradual progress of humanity interrupted and set upon a path of greed and destruction. Choices were made that forged that path toward destruction of life itself—the moment in which we now live and die as our planet shrivels, overheated. To learn and know this history is both a necessity and a responsibility to the ancestors and descendants of all parties.

What historian David Chang has written about the land that became Oklahoma applies to the whole United States: “Nation, race, and class converged in land.” Everything in US history is about the land—who oversaw and cultivated it, fished its waters, maintained its wildlife; who invaded and stole it; how it became a commodity (“real estate”) broken into pieces to be bought and sold on the market.

US policies and actions related to Indigenous peoples, though often termed “racist” or “discriminatory,” are rarely depicted as what they are: classic cases of imperialism and a particular form of colonialism—settler colonialism. As anthropologist Patrick Wolfe writes, “The question of genocide is never far from discussions of settler colonialism. Land is life—or, at least, land is necessary for life.”

The history of the United States is a history of settler colonialism— the founding of a state based on the ideology of white supremacy, the widespread practice of African slavery, and a policy of genocide and land theft. Those who seek history with an upbeat ending, a history of redemption and reconciliation, may look around and observe that such a conclusion is not visible, not even in utopian dreams of a better society.

Writing US history from an Indigenous peoples’ perspective requires rethinking the consensual national narrative. That narrative is wrong or deficient, not in its facts, dates, or details but rather in its essence. Inherent in the myth we’ve been taught is an embrace of settler colonialism and genocide. The myth persists, not for a lack of free speech or poverty of information but rather for an absence of motivation to ask questions that challenge the core of the scripted narrative of the origin story. How might acknowledging the reality of US history work to transform society? That is the central question this book pursues.

Teaching Native American studies, I always begin with a simple exercise. I ask students to quickly draw a rough outline of the United States at the time it gained independence from Britain. Invariably most draw the approximate present shape of the United States from the Atlantic to the Pacific—the continental territory not fully appropriated until a century after independence. What became independent in 1783 were the thirteen British colonies hugging the Atlantic shore. When called on this, students are embarrassed because they know better. I assure them that they are not alone. I call this a Rorschach test of unconscious “manifest destiny,” embedded in the minds of nearly everyone in the United States and around the world. This test reflects the seeming inevitability of US extent and power, its destiny, with an implication that the continent had previously been terra nullius, a land without people.

Woody Guthrie’s “This Land Is Your Land” celebrates that the land belongs to everyone, reflecting the unconscious manifest destiny we live with. But the extension of the United States from sea to shining sea was the intention and design of the country’s founders. “Free” land was the magnet that attracted European settlers. Many were slave owners who desired limitless land for lucrative cash crops. After the war for independence but preceding the writing of the US Constitution, the Continental Congress produced the Northwest Ordinance. This was the first law of the incipient republic, revealing the motive for those desiring independence. It was the blueprint for gobbling up the British-protected Indian Territory (“Ohio Country”) on the other side of the Appalachians and Alleghenies. Britain had made settlement there illegal with the Proclamation of 1763.

In 1801, President Jefferson aptly described the new settler-state’s intentions for horizontal and vertical continental expansion, stating: “However our present interests may restrain us within our own limits, it is impossible not to look forward to distant times, when our rapid multiplication will expand itself beyond those limits and cover the whole northern, if not the southern continent, with a people speaking the same language, governed in similar form by similar laws.” This vision of manifest destiny found form a few years later in the Monroe Doctrine, signaling the intention of annexing or dominating former Spanish colonial territories in the Americas and the Pacific, which would be put into practice during the rest of the century.

Origin narratives form the vital core of a people’s unifying identity and of the values that guide them. In the United States, the founding and development of the Anglo-American settler-state involves a narrative about Puritan settlers who had a covenant with God to take the land. That part of the origin story is supported and reinforced by the Columbus myth and the “Doctrine of Discovery.” According to a series of late-fifteenth-century papal bulls, European nations acquired title to the lands they “discovered” and the Indigenous inhabitants lost their natural right to that land after Europeans arrived and claimed it. As law professor Robert A. Williams observes about the Doctrine of Discovery:

Responding to the requirements of a paradoxical age of Re-
naissance and Inquisition, the West’s first modern discourses
of conquest articulated a vision of all humankind united
under a rule of law discoverable solely by human reason. Un-
fortunately for the American Indian, the West’s first tentative
steps towards this noble vision of a Law of Nations contained
a mandate for Europe’s subjugation of all peoples whose ra-
dical divergence from European-derived norms of right conduct
signified their need for conquest and remediation.

The Columbus myth suggests that from US independence onward, colonial settlers saw themselves as part of a world system of colonization. “Columbia,” the poetic, Latinate name used in reference to the United States from its founding throughout the nineteenth century, was based on the name of Christopher Columbus. The “Land of Columbus” was—and still is—represented by the image of a woman in sculptures and paintings, by institutions such as Columbia University, and by countless place names, including that of the national capital, the District of Columbia. The 1798 hymn “Hail, Columbia” was the early national anthem and is now used whenever the vice president of the United States makes a public appearance, and Columbus Day is still a federal holiday despite Columbus never having set foot on any territory ever claimed by the United States.

2. An Indigenous Peoples' History of the United States (REVISIONING HISTORY)

3. An Indigenous Peoples History of the United States (REVISIONING HISTORY)

4. An Indigenous Peoples' History of the United States (REVISIONING HISTORY)

5. An Indigenous Peoples History of the United States (REVISIONING HISTORY)

6. An Indigenous Peoples History of the United States (REVISIONING HISTORY)

7. An Indigenous Peoples' History of the United States (REVISIONING HISTORY)

8. An Indigenous Peoples History of the United States (REVISIONING HISTORY)

9. An Indigenous Peoples History of the United States (REVISIONING HISTORY)

10. An Indigenous Peoples' History of the United States (REVISIONING HISTORY)