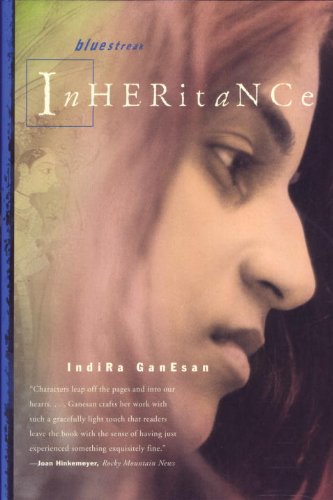 Characters leap off the pages and into our hearts. . . . Ganesan crafts her work with such a gracefully light touch that readers leave the book with the sense of having just experienced something exquisitely fine. -Joan Hinkemeyer, Rocky Mountain News

Inheritance is a gracefully wrought novel centering on the emotional awakening of Sonil, a fifteen-year-old girl living with her aunts in India. Overcome by a lingering illness, she travels to the mythic island of Pi to recover under the care of her beloved grandmother. In this lush Arcadian space, boundaries between what is real and what is not diminish, and Sonil begins to discover who she is. Rejected by her emotionally distant mother and searching desperately for any information about her American father, she seeks solace in an affair with an American man twice her age. It is through that relationship of love and loss that she begins to understand and forgive her mother, realizing for the first time what she has inherited and what she must forge for herself.

Remember all those hippies who ran off to India in the 1970s in search of enlightenment? One of the little delights of Indira Ganesan's Inheritance is getting an Indian view of how those truth-seekers fit into the culture and affected the people around them. A kind of mild feminism guides this unassuming novel of adolescence and self-discovery, set on an island off the Indian coast. The story meanders with its 15-year-old narrator, Sonil, whose chronic poor health has landed her a prolonged break from school at the home of her grandmother. There, time drifts, and events unfold in the flat, unquestioned perspective of youth. Sonil is fatherless, and men appear only fleetingly as silhouettes, sharply outlined but unfathomable. Her relationships with the three generations of women in the household--especially her hostility toward her aloof, eccentric mother--define the girl. But she encounters a young American man, in India to study Ayurvedic medicine, and for a while, the chaos of Sonil's sensuality focuses on Richard, a passionate but emotionally immature hippie, twice her age.

Through her short-lived relationship with him (lots of lovemaking to the music of Bob Dylan, George Harrison, and the Talking Heads), the wavering line of her life begins to trace a circle, leading her back to her mother and her unknown father, an American who disappeared from India before Sonil was born. Her inheritance, it seems, is a mandala, full of repeating patterns, which, as the book ends, Sonil is beginning to draw deliberately. Ganesan's prose style has a frank simplicity that is pleasing but evanescent.

novel since her debut with The Journey, Indira Ganesan gives us the story of Sonil, who at fifteen has come to her adored grandmother's house on a paradisiacal island off the coast of India ("a tiny eye, to the teardrop that was Sri Lanka") to mend her shaky health. She has been living on the mainland with her aunts, to whom she was sent by her mother when she was a baby, and she yearns to find out why she was exiled and where her American father might be.

On the island, she spends her time studying Italian with her absentminded uncle . . . talking about boys and clothes with her favorite cousin, Jani . . . spying on her mysteriously distant mother. The gorgeous surroundings--the mango trees, the flowers, the heat, the monkeys--awaken her senses, and ours too, as she settles in for a seemingly endless summer.

Little by little, her spirits revive, and we see Sonil begin to move out of the magical world of her grandmother's compound into the wider life o