Items related to Carnival of Fury: Robert Charles and the New Orleans...

Carnival of Fury: Robert Charles and the New Orleans Race Riot of 1900 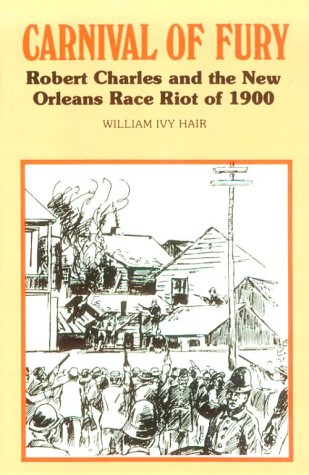 The River Flows On offers an impressively broad examination of slave resistance in America, spanning the colonial and antebellum eras in both the North and South and covering all forms of recalcitrance, from major revolts and rebellions to everyday acts of disobedience. Walter C. Rucker analyzes American slave resistance with a keen understanding of its African influences, tracing the emergence of an African American identity and culture. Rucker points to the shared cultural heritage that facilitated collective action among both African- and American-born slaves, such as the ubiquitous belief in conjure and spiritual forces, the importance of martial dance and the drum, and ideas about the afterlife and transmigration. Focusing on the role of African cultural and sociopolitical forces, Rucker gives in-depth attention to the 1712 New York City revolt, the 1739 Stono rebellion in South Carolina, the 1741 New York conspiracy, Gabriel Prosser's 1800 Richmond slave plot, and Denmark Vesey's 1822 Charleston scheme. He concludes with Nat Turner's 1831 revolt in Southampton, Virginia, which bore the marks of both conjure and Christianity, reflecting a new, African American consciousness. With rich evidence drawn from anthropology, archaeology, and religion, The River Flows On is an innovative and convincing study.

William Ivy Hair (1930--1992) was Fuller E. Callaway Professor of Southern History at Georgia College in Milledgeville, Georgia. He is the author of several books, including The Kingfish and His Realm: The Life and Times of Huey P. Long and Bourbonism and Agrarian Protest: Louisiana Politics, 1877--1900.W. Fitzhugh Brundage is a professor of history and Director of Graduate Studies at the University of North Carolina--Chapel Hill. He is the author of A Socialist Utopia in the New South: The Ruskin Colonies in Tennessee and Georgia, 1894--1901 and Lynching in the New South: Georgia and Virginia, 1880--1930.

1. Carnival of Fury: Robert Charles and the New Orleans Race Riot of 1900