Items related to A Confederacy of Dunces: A Novel

Toole, John Kennedy A Confederacy of Dunces: A Novel

A Confederacy of Dunces: A Novel 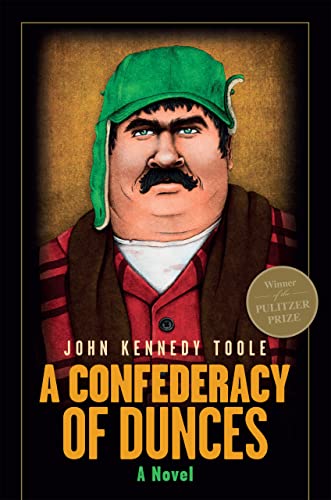 After more than three decades, the peerless wit and indulgent absurdity of A Confederacy of Dunces continues to attract new readers. Though the manuscript was rejected by many publishers during Toole's lifetime, his mother successfully published the book years after her son's suicide, and it won the 1981 Pulitzer Prize for fiction. This literary underdog and comic masterpiece has sold more than two million copies in twenty-three languages.

The 35th anniversary edition of A Confederacy of Dunces celebrates Toole's novel as well as one of the most memorable protagonists in American literature, Ignatius J. Reilly, whom Walker Percy dubbed "slob extraordinaire, a mad Oliver Hardy, a fat Don Quixote, a perverse Thomas Aquinas rolled into one." Set in New Orleans with a wild cast of characters including Ignatius and his mother; Miss Trixie, the octogenarian assistant accountant at Levi Pants; inept, wan Patrolman Mancuso; Darlene, the Bourbon Street stripper with a penchant for poultry; and Jones, the jivecat in space-age dark glasses, the novel serves as an outlandish but believable tribute to a city defined by its parade of eccentric denizens.

The genius of A Confederacy of Dunces is reaffirmed as successive generations embrace this extravagant satire. Adulation for Toole's comic epic remains as intense today as thirty-five years ago.

"A green hunting cap squeezed the top of the fleshy balloon of a head. The green earflaps, full of large ears and uncut hair and the fine bristles that grew in the ears themselves, stuck out on either side like turn signals indicating two directions at once. Full, pursed lips protruded beneath the bushy black moustache and, at their corners, sank into little folds filled with disapproval and potato chip crumbs."

Meet Ignatius J. Reilly, the hero of John Kennedy Toole's tragicomic tale, A Confederacy of Dunces. This 30-year-old medievalist lives at home with his mother in New Orleans, pens his magnum opus on Big Chief writing pads he keeps hidden under his bed, and relays to anyone who will listen the traumatic experience he once had on a Greyhound Scenicruiser bound for Baton Rouge. ("Speeding along in that bus was like hurtling into the abyss.") But Ignatius's quiet life of tyrannizing his mother and writing his endless comparative history screeches to a halt when he is almost arrested by the overeager Patrolman Mancuso--who mistakes him for a vagrant--and then involved in a car accident with his tipsy mother behind the wheel. One thing leads to another, and before he knows it, Ignatius is out pounding the pavement in search of a job.

Over the next several hundred pages, our hero stumbles from one adventure to the next. His stint as a hotdog vendor is less than successful, and he soon turns his employers at the Levy Pants Company on their heads. Ignatius's path through the working world is populated by marvelous secondary characters: the stripper Darlene and her talented cockatoo; the septuagenarian secretary Miss Trixie, whose desperate attempts to retire are constantly, comically thwarted; gay blade Dorian Greene; sinister Miss Lee, proprietor of the Night of Joy nightclub; and Myrna Minkoff, the girl Ignatius loves to hate. The many subplots that weave through A Confederacy of Dunces are as complicated as anything you'll find in a Dickens novel, and just as beautifully tied together in the end. But it is Ignatius--selfish, domineering, and deluded, tragic and comic and larger than life--who carries the story. He is a modern-day Quixote beset by giants of the modern age. His fragility cracks the shell of comic bluster, revealing a deep streak of melancholy beneath the antic humor. John Kennedy Toole committed suicide in 1969 and never saw the publication of his novel. Ignatius Reilly is what he left behind, a fitting memorial to a talented and tormented life. --Alix Wilber

When Walker Percy penned these prophetic words in his foreword to the first edition of A Confederacy of Dunces, he could not have known just how wide Toole's "world of readers" would become. Released by Louisiana State University Press in April 1980, A Confederacy of Dunces is nothing short of a publishing phenomenon. Turned down by countless publishers and submitted by the author's mother years after his suicide, the book won the 1981 Pulitzer Prize for Fiction. Today, there are over 1,500,000 copies in print worldwide in eighteen languages.

Toole's lunatic and sage novel introduces one of the most memorable characters in American literature, Ignatius Reilly, whom Percy dubs "slob extraordinary, a mad Oliver Hardy, a fat Don Quixote, a perverse Thomas Aquinas rolled into one -- who is in violent revolt against the entire modern age". Ignatius' ire explodes when his mother backs her car into another automobile. The owner of the damaged vehicle insists on payment; Mrs. Reilly demands that her son cease watching television and writing in his Big Chief tablet and get a job.

Set in New Orleans, A Confederacy of Dunces outswifts Swift, one of whose essays gives the book its title. As its characters burst into life, they leave the region and literature forever changed by their presences -- Ignatius and his mother; Miss Trixie, the octogenarian assistant accountant at Levy Pants; inept, wan Patrolman Mancuso; Darlene, the Bourbon Street stripper with a penchant for poultry; Jones, the jivecat in space-age dark glasses. Satire and farce animate A Confederacy of Dunces; tragic awareness ennobles it.

Louisiana State University Press celebrates A Confederacy of Dunces' twentieth year withthis anniversary edition, which includes a new introduction by Andrei Codrescu that examines the relationship of this modern-day classic to the city whose pulse it so brilliantly captures.

2. A Confederacy of Dunces: A Novel

3. A Confederacy of Dunces: A Novel

4. A Confederacy of Dunces: A Novel

5. A Confederacy of Dunces: A Novel

6. A Confederacy of Dunces: A Novel

7. A Confederacy of Dunces: A Novel

8. A Confederacy of Dunces: A Novel

9. A Confederacy of Dunces (Hardback or Cased Book)

10. A Confederacy of Dunces (35th Anniversary Edition): A Novel