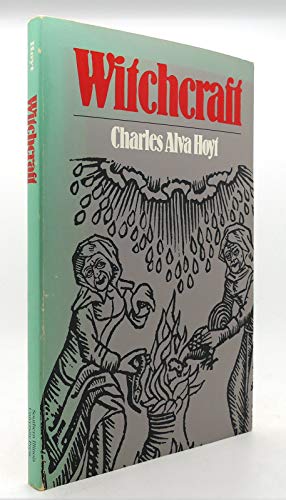 Descendant of Susanna Martin, who was hanged as a witch because she walked into Salem in the rain without getting her feet wet, Hoyt describes his book as a guide, a text, to help students find the way to the right questions, through an enormous mass of complex, contradictory, and emotionally charged material.” Confusion exists even in so basic a text as the injunction found in the King James translation of Exodus that Thou shalt not suffer a witch to live.” Hoyt argues persuasively that this charge to the faithful, which has cost the lives of hundreds of thousands,” is an error in translating the word kashaph as witch rather than poisoner, as the author of Exodus intended.

Dealing further with the scriptural deri­vation for the bases of witchcraft, Hoyt shows that it was only with the New Testa­ment’s personification of Satan that witch­craft was supplied with the personalized principle of evil” it required to prosper. He discusses the pantheon of hell, including the fiends Beelzebub, Mephistopheles, Asmodeus, Apollyon, and Belial. He concludes his historical analysis with a discussion of the witch queen Hecate, Circe the enchantress, and Medea.

Hoyt has identified seven schools of witch­craft, including the orthodox, the skeptics, the anthropological, the psychological, the pharmacological, the transcendental, and the occult. His perceptive classification of these schools greatly assists the student of witch­craft through the associations they combine and suggest.

Utilizing citations from witch trials, Hoyt is able to illustrate many of his arguments concerning the practice of witchcraft and be­liefs concerning witches. Such records also provide stark evidence of the justice afforded those thought to be witches. Peter Stubbe, for example, was executed for lycanthropy by having his flesh ripped from his bones with red-hot pincers, his arms and legs bro­ken, and finally his head strook from his body.”

Hoyt manages a very comprehensive overview of the subject, as much or more than the average reader will want to know. He remains very objective on a quite emotional issue.” The Priest

"Witchcraft is a good general survey not only of witchcraft but also of satanism, the occult, and other assorted aspects of the black arts." Alan M. Olson, The Review of Books and Religion

Buy Used
Condition: Good
Item in good condition and has... Learn more about this copy

Book Description Southern Illinois University Press, Carbondale IL, 1981. Soft Cover. Condition: Acceptable. No Jacket. Ex-Lib with all the Usual Suspects, as well as rather severe rubbing of both wraps, overall handling soil of wraps, multiple creases (one near 3") at wrapper corners, rounding of corners, chipping, blind tears at hinges (one over an inch), split across spine (not affecting integrity of binding);p 122 has lines in margin. In spite of all this, a sound, sturdy little workhorse of a book. Size: 8vo - over 7ľ" - 9ľ" tall. Used. Seller Inventory # 007696