Items related to Backwards & Forwards: A Technical Manual for Reading... 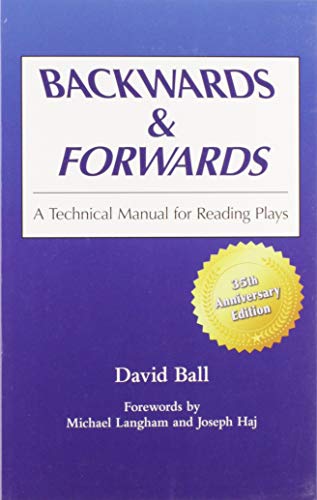 Considered an essential text since its publication thirty-five years ago, this guide for students and practitioners of both theater and literature complements, rather than contradicts or repeats, traditional methods of literary analysis of scripts.

Ball developed his method during his work as literary director at the Guthrie Theater, building his guide on the crafts playwrights of every period and style use to make their plays stageworthy. The text is full of tools for students and practitioners to use as they investigate plot, character, theme, exposition, imagery, conflict, theatricality, and the other crucial parts of the superstructure of a play. Also included are guides for discovering what the playwright considers a play’ s most important elements, thus permitting interpretation based on the foundation of the play rather than its details.

Using Shakespeare’s Hamlet as illustration, Ball assures a familiar base for clarifying script-reading techniques as well as exemplifying the kinds of misinterpretation readers can fall prey to by ignoring the craft of the playwright. Of immense utility to those who want to put plays on the stage (actors, directors, designers, production specialists) Backwards & Forwards is also a fine playwriting manual because the structures it describes are the primary tools of the playwright.

David Ball wrote Backwards and Forwards when he was  Professor of playwriting, acting, theater history, and literature at Carnegie-Mellon University. He had earlier been on the senior directing and literary staffs at the Guthrie Theater in Minneapolis, and more recently was Head of Drama at Duke University during that department's "Golden Years." His students have gone on to win  Emmies, Oscars, Obies, and Tony awards in every area of theater, TV, and film.  Backwards and Forwards has been the field's standard text for a quarter century, making Dr. Ball one of the most influential and respected of theater and film theorists, educators, and trainers of his generation. His own professional directing, producing, and writing credits encompass Broadway, off-Broadway, regional theater, and film; and his landmark adaptation of Moliere's The Miser was staged in major regional theaters from coast to coast as one of Theatre de la Jeune Lune's Tony-award-winning productions.

“In fewer than one hundred pages, this marvelously instructive book shows how to unlock the secrets of plot, character, theme, exposition, imagery, motivation, conflict, theatricality and pacing. . . . Our editor says he learned more about dramatic structure in the few hours he spent with this ninety-six-page book than he has in his twenty years of theater experience.”—Stage Directions

“Ball wrote [Backwards and Forwards] to help people who put on plays understand how a play works. . . . He argues that scripts represent a special kind of writing—because it is writing meant to be staged, not read— and thus requires special reading techniques; these techniques are what he offers.”—Dramatics

“David Ball’s Backwards and Forwards is without a doubt the most practical, useful, and inspiring book I've used in my graduate playwriting classes. Its value extends beyond playwrights to directors, actors, and anyone interested in how plays are constructed, analyzed, and appreciated. It’s the bible for all theater practitioners.”—Stephen DiMenna, faculty at New York University

“This book is invaluable for teaching writers how to read a play and hence how to craft their own. So many craft books try to redefine the language around writing. Ball keeps it simple and true, which is why it is a classic in theater pedagogy. I can’t teach without it.”—Darrah Cloud, Goddard College

“David Ball’s Backwards and Forwards is the standard for anyone trying to understand the nature of dramatic action. No book has more succinctly and pragmatically described how plays actually work than this one, and the worth of this book is proven by its ubiquity on the shelves of playwrights, dramaturgs, and teachers of dramatic literature all over the English-speaking world.”—Michael M. Chemers, author of Ghost Light: An Introductory Handbook for Dramaturgy

“Backwards and Forwards is the foundation text for my undergraduate script analysis class. Concise, easy to navigate, and thought-provoking, Ball's work provides a common language and methodology with which theatre artists can navigate dramatic text. Accessible to those both new to and familiar with script analysis, Ball's text paves the way for rich discussion and meaning making in the classroom and on stage.”—Elizabeth Horn, assistant professor of theatre, University of Central Florida

“David Ball's brilliantly conceived and written book is a valuable asset in all of my scripting classes. Though aimed at playwriting, Backwards and Forwards is of particular use in my screenwriting classes, where we use his concepts to understand why there are so many flimsy plotlines in modern films. Ball's book . . . is an essential text for classes and professional writers.”—Michael Wright, University of Tulsa

“Backwards and Forwards is an essential part of my acting class. I have found no better book to lay the groundwork for the principles we will be working on over our four-year training program. One of the strengths of the book is its ability to get students from such diverse backgrounds and levels of experience to work together and get on the same page.”—Richie Call, Utah State University

“Indispensable in my directing classes, this slender little volume contains an elusive mix of uncommon clarity, bracing provocation, and immediate usefulness. Never one to linger on his own cleverness, Ball makes an immediate case for action and propulsion in both script analysis and theatrical production. Directors must learn to read plays before they can direct plays, and Ball’s book gives them the tools they need to read plays carefully and purposefully.”—Matthew Reeder, Ball State University

“David Ball's little tome may have been written for directors of theater, but I find its practical and straightforward manner in explaining how to read a script essential for writers. I require this book for my screenwriters, television writers, and playwrights. It is a core part of my library.”—Sean Gaffney, director of the MFA in script and screenwriting, Regent University

“Backwards and Forwards: succinct, clear, incisive. As long as stories are valued, this book will stay young. I just keep going back to it. Students love it. And so do their teachers.”—David Feldshuh, Cornell University

“Backwards and Forwards is a brilliant, unique, and influential book. I have used it for many years in my work as a professional actor and director, as well as in the classroom when teaching directing and play analysis.”—Harold Dixon, distinguished professor emeritus, School of Theatre Arts, University of Arizona

“It's extremely rare that you will read a book and it changes your perspective on not only what you do creatively but also how you do what you do. David Ball's Backwards and Forwards is that book for me. It gave me a practical way to inject new life into techniques that I'd been using for years which allowed me to become a much better writer, acting coach, and college professor.”—Kenneth Cosby, former writing professor at the University of Southern California, Los Angeles, and New York University

“I first encountered Backwards and Forwards as an undergraduate and now, as a college professor, teach it to my own students. The book’s deceptively simple, straightforward approach to play analysis not only is timeless but also continues to provide me with fresh insights as both a scholar and a practitioner.”—Inga Meier, Stephen F. Austin University

“In less than one hundred pages Backwards and Forwards has taught me more about theatre than any other book. It makes me a better artist and a better teacher.”—Matt Fotis, Albright College

“For such a little book, Backwards and Forwards packs a wallop. For decades, Ball’s thoroughly enjoyable read has been my secret weapon for every class that I taught in theatre arts. I have used it faithfully as the key reference text guiding student actors through in-depth analyses of the classics of world theatre. . . . For the first-time reader, it can be devoured in one sitting. For the most experienced actor, director, or scenographer it is a text best kept on the shelf as a well-worn reference. Breezy, engrossing, and succinct, Backwards and Forwards is the key to unlocking the universe of the theatrical canon of world plays.”—Theresa Larkin, California State University, Los Angeles

Backwards and Forwards: A Technical Manual for Reading Plays (Paperback)

Book Description Paperback. Condition: New. 2nd ed. Language: English. Brand new Book. Considered an essential text since its publication thirty-five years ago, this guide for students and practitioners of both theatre and literature complements, rather than contradicts or repeats, traditional methods of literary analysis of scripts. Seller Inventory # AAZ9780809311101

Shipping: US$ 4.97
From United Kingdom to U.S.A.
Destination, rates & speeds

Backwards and Forwards : A Technical Manual for Reading Plays